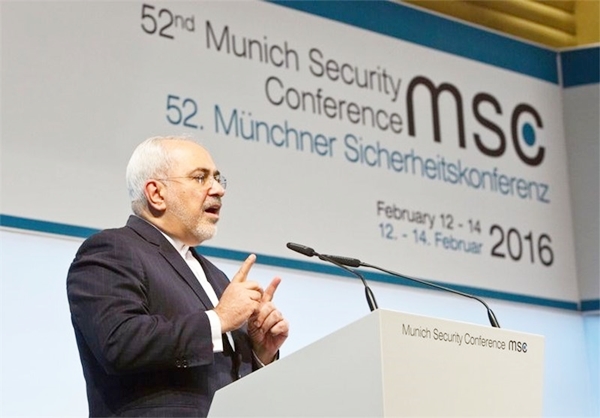 Iranian Foreign Minister Mohammad Javad Zarif voiced the country’s readiness to cooperate with Saudi Arabia on the settlement of the regional problems, saying that Tehran and Riyadh cannot ignore each other in the region.

“We are prepared to work with Saudi Arabia… Iran and Saudi Arabia have common interests in Syria, and Tehran and Riyadh need to work together,” Zarif said on Friday, addressing the 52nd Munich Security Conference (MSC) in Germany.

Expressing Iran’s preparedness to cooperate with Saudi Arabia for the settlement of the regional conflicts, Zarif added, “Iran and Saudi Arabia cannot exclude each other from the region.”

He added that the countries in the region are facing “common threats” that have created problems for “our brothers in Turkey, Saudi Arabia, Pakistan, even in Afghanistan and the Central Asia.”

Zarif then referred to the “challenge of sectarianism” as a threat against all regional countries.

“We have a common opportunity, common challenges, common threats and a better future,” he added.

Zarif also called on the regional countries to reconsider their “paradigms,” adding, “We have to change this paradigm. I can assure you. Iran is ready.”

He further urged the countries in the region to “start redefining problems” and “set aside” their past differences instead of remaining “prisoner of the past.”

Pointing to Saudi Arabia’s decision to sever ties with Iran, Zarif underlined that Tehran and Riyadh should not follow a policy of exclusion, bemoaning the fact that Saudis have been seeking to eliminate Iran from the political equations, including from the Syria peace talks.

Saudi Arabia’s decision to sever relations with Iran came after the kingdom’s execution of prominent Shiite cleric Sheikh Nimr al-Nimr drew widespread international condemnation and ignited furious protests in Iran during which some of the demonstrators stormed the Saudi diplomatic buildings in the cities of Tehran and Mashhad.

Iranian officials condemned the attacks, with President Hassan Rouhani calling for the perpetrators to be brought to justice.