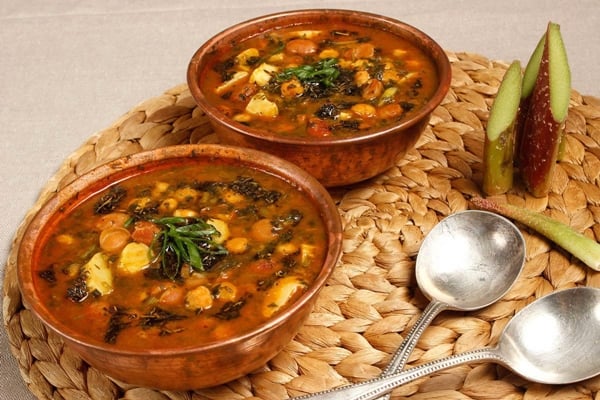 Zanjan prune broth, a kind of broth traditionally cooked in the Iranian city of Zanjan, contains sour prunes and other ingredients which make it one of the most delicious Iranian dishes.

The so-called Zanjan prune broth has long been favourite with folks in the city of Zanjan in northwestern Iran. It is also popular in other cities such as Malayer, Hamedan, Boroujerd and Nahavand.

The broth is popular with tourists and visitors as well. The ingredients include pulses and dried apricots, among other things, and the food is served with grape syrup and grape vinegar after it is cooked.

Last year, the traditional skill of cooking Zanjan prune broth was registered on the National List of Intangible Heritage in a ceremony attended by the vice president and head of the country’s Cultural Heritage Organization.

Barley: As much as needed

Small-sized Dried Greengage: Half a glass

Dried Apricots: Half a glass

Garlic: As much as necessary

Vinegar: As much as necessary

Lay the pulses in water the night before and change the water several times. Then put them on the flame until half-cooked. Chop 1 kg of broth herbs, including leeks, coriander, parsley and spinach. Use a little bit more coriander, and less of the other three herbs, with an equal amount each.

Cook the chopped herbs before adding the pulses to them. Let the concoction be cooked through. Meanwhile, shred the onions and fry them. Then add them to the broth along with sliced carrots and two chopped potatoes. After half an hour, add the dried greengage and apricots.

Now add some salt and pepper. Then dissolve two spoonfuls of sugar in half a cupful of white vinegar, lime juice or sour orange juice, and add it to the broth. After the taste of the broth changes, add one pack of noodles. (Break the noodles in half, so that there will be enough noodles to go around when serving the dish.)

If you like beetroots, chop them to very small pieces before adding the noodles and spices, and allow the chopped beetroots to be cooked with other ingredients.

If interested, you may add ground walnuts to the broth. In some recipes for the same kind of broth like the one cooked in Hamedan, they use grape syrup instead of sugar, and grape vinegar instead of white vinegar.