You’d better speak for yourself, not on behalf of Leader 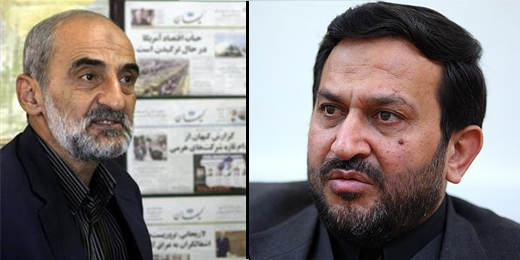 The media advisor to the IRGC commander has urged Kayhan’s managing editor to stop instilling in his readership the feeling that his viewpoints mirror those of the Supreme Leader.

An advisor to the commander of the Islamic Revolution Guards Corps has said that Kayhan daily’s chief had better express his own views and not speak on behalf of the Supreme Leader.

Hamid Reza Moghaddam-Far, a media advisor to Major General Mohammad Ali Jafari, made the comment in an opinion piece released Sunday in reaction to a Saturday editorial by the principlist daily’s Hossein Shariatmadari and added, “I wonder why you insist on inculcating in your readership that the Supreme Leader thinks like you?”

Entekhab.ir on August 16 published a brief report on the advisor’s piece and Kayhan’s editorial. The following is the translation of that report:

I read your piece on the nuclear issue and the Joint Comprehensive Plan of Action (JCPOA) in Kayhan daily on Saturday (August 15) and pondered on it. How come a revolutionary brother like you is insisting on instilling in his audience a feeling that the Supreme Leader’s line of thinking is like his? Or the Supreme Leader’s analysis and understanding is similar to the way [Kayhan’s managing editor] analyzes and understands things?

This comes despite the fact that the Supreme Leader took a candid stance on this issue [nuclear question] in his Eid-ul-Fitr prayer sermons and made transparent comments when addressing state officials. ….

If we are to pick and choose, which one do you think would be our pick: the Supreme Leader’s line announced by his website [leader.ir] or your piece of writing? Are we supposed to lend our ears to the straightforward remarks of the Supreme Leader that anything [the deal] should go through legal channels and should be approved or rejected in line with national interests, and avoid making hasty judgments or drawing quick conclusions?

Or shall we dig in our heels, insist on and promote our interpretation that any conclusion which is drawn outside the legal channels is viewed as running counter to the Supreme Leader’s view?

Don’t you think such posturing will create a chasm among revolutionary forces at a time when they need solidarity and unity more than ever before? Don’t you think it would be better if you expressed your own views, rather than talk on behalf of the Supreme Leader?

Remarks by the Supreme Leader in Eid-ul-Fitr prayer sermons this year leave no doubt that he knows full well about the catastrophic consequences and shortcomings of the Iran nuclear deal. One can definitely say that the Leader is not, by any means, satisfied with the text of the deal; otherwise, given the Supreme Leader’s thorough knowledge about the Vienna agreement, his stress on and frequent repetition of “We will not let go of the revolution’s principles whether or not the deal is approved” would be unnecessary.

So those who are in charge of reviewing the text of the Vienna accord have an unshakable responsibility to reject those articles, chapters and provisions of JCPOA which do not conform to the principles of Islam, the revolution and the establishment so that they – as the Supreme Leader has put it – will not feel disgraced and humiliated before people and later before the divine court.

If we believe that the Vienna agreement and its related documents – including Resolution 2231 and the IAEA’s roadmap – come with articles and points which are catastrophic for the revolution’s principles and that the very articles and points have concerned the Supreme Leader and all those caring [for the establishment], the only way forward is the rejection of JCPOA in its entirety. Is there any other way?