A senior Iranian official says the world’s largest copper tray has been built in Iran’s Zanjan province upon the order of the Emir of one of the Persian Gulf states.

This tray is 3 metres long and 1.32 metres wide, weighs 335 kilograms with its handles and 285 kg without them, said Yahya Rahmati, the director of the Cultural Heritage, Handicrafts and Tourism Department of Zanjan province.

Akbar Qezelbash, the artist who has crafted the tray, explained that his creation far outmatched any other tray in the world both in terms of weight and dimensions. 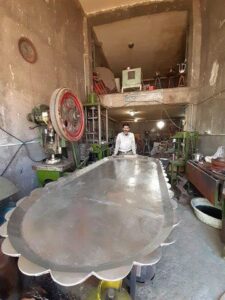 “Four 8mm thick copper sheets are used in the making of this tray using welding brass, which is a first,” said 51-year-old Qezelbash.

Brass, an alloy of copper and zinc, is not easy to weld on copper sheets mainly because zinc has a much lower melting point.

“The design work on this big project has been impromptu and took 38 days to finish,” he added.

The Zanjani Artist said he was going to make a total of seven trays in three different dimensions.