World Problems Not to Be Resolved Unless Commitments Met: Iran

Iran’s President Hassan Rouhani, who is India on an official visit, says as long as the world’s governments do not adhere to the codes of ethics and live up to their commitments, human problems will not be resolved.

Addressing a group of scholars and diplomats at the Observer Research Foundation (ORF) in New Delhi, Rouhani said human beings have faced problems like terrorism and violence for thousands of years.

He noted that humans are definitely not destined to abide by war and terror as they have gained many scientific achievements and virtues, a Farsi report by IRIB quoted him as saying.

Rouhani stated that despite all these achievements, there are problems that we have not yet been able to overcome. He also mentioned that many of the wars are waged due to computational errors.

“The US is a developed country with many scientists. It has trained and sent hundreds of thousands of spies to Iran, and decided for Iran in many different political and economic arenas for many years.”

Before the 1979 Revolution, Washington used to make decisions for Iran on military and cultural affairs and give orders to the Shah of Iran, he said, adding, however, the country has been making computational errors since the Islamic revolution.

Talking about the nuclear deal, the Iranian president said the agreement has been endorsed by seven states plus the UN Security Council. “Washington’s violation of the accord is in fact standing against the global public opinion.”

“As a country that has consistently met our commitments, we adhere to the JCPOA as long as all parties adhere to it. Trump is a businessman who thinks the world of politics is like the world of business.”

Noting that bargaining over a signed accord is something funny, he said the US will certainly regret it if it breaks the deal.

“As long as ethics is not observed, the world will not [become a safe place], and the problem of war and bloodshed will not be resolved,” added Rouhani.

Rouhani further underscored that today, ethics is not the basis of international politics, but it is rather dominated by power and as everyone knows the five countries that are in possession of nukes hold veto power.

Rouhani also lashed out at the United Nations saying the world body is not a place for the rule of justice these days.

“As long as justice does not dominate the world of politics, we will continue to see conflicts across the globe,” concluded the Iranian president. 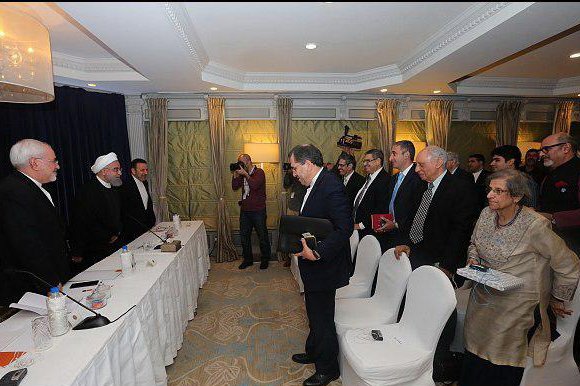 During his visit to New Delhi, Rouhani also met with the community of Iranian-Indian Zoroastrians and called on them to invest in Iran.

He said India is the land of all religions that coexist together peacefully. He stressed that such coexistence exists in Iran as well, and the followers of other religious have a special role in the country.

“Iran’s progress has been achieved due to its ancient culture and civilization. We should not cut off our connection with our ancestors.”

“We are eager to see all Iranians have a closer relationship with their country. When Iran is attractive to all investors, you can come and invest as well,” said Rouhani.

He went on to say that Iran is rich in culture and civilization adding that the Islamic Republic is a great country that has successful scholars and economic activists across the world.

“We welcome all Iranian investors. In the past year, 400 successful Iranian entrepreneurs have returned to the country and have invested in Iran. God willing, we will build a more developed Iran with together,” he concluded.