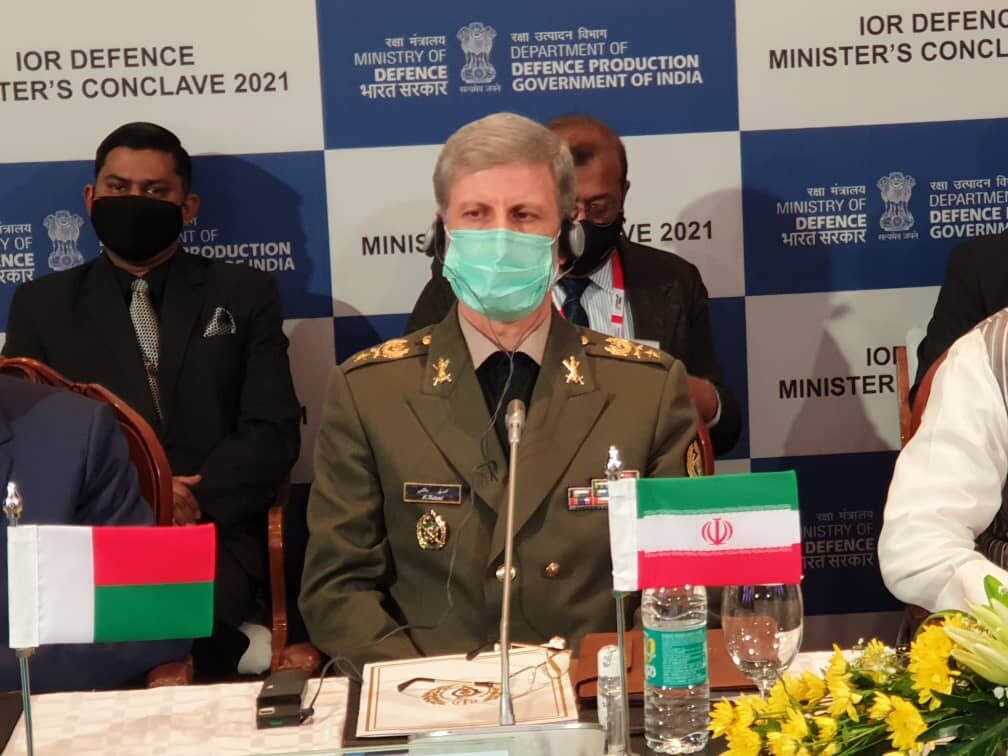 Iran's defence minister has highlighted the necessity of re-engineering the world order on the basis of the new emerging powers and to dismiss the conventional polarizations.

Brigadier General Amir Hatami, the Defence Minister of the Islamic Republic of Iran, made the remarks in a speech at the IOR Ministerial Conclave held in India’s Bengaluru on 4 February 2021.

What follows is the full text of his speech:
In the name of God, the most beneficent, the most merciful

At the outset, I would like to extend my sincere regards towards the distinguished guests, high ranking officials, commanders and senior officers and to I express my heartfelt happiness to be in such an august gathering.

It is necessary for me to thank the government of Republic of India and the Hon’ble Defence Minister H. E. Rajnat Singh for inviting me to this forum and thereby giving me the opportunity to share my viewpoints with you.

Hon’ble Chairperson,
Dear guests, ladies and gentlemen,
The security developments and events in the past recent decades reminds a crucial point to the world and that is the necessity to re-engineer the world order on the basis of the new emerging powers and to dismiss the conventional polarizations. The bitter events in the past decade has proven to us that the prescribed patterns and models of the hegemonic powers result only in violence, extremism, terrorism, bloodshed, border disputes, conflict, insecurity and destruction.

We have clearly witnessed how the world could become more dangerous and subject to more insecurity as a result of incompetent, ignorant, unruly and hate-spreading rulers coming into power, in particular in the large and influential countries of the world. The unilateral dismissal of international treaties, dishonoring of significant treaties involving the future of the planet and the environment on account of being not economical, pulling out of security agreements due to their costliness, onslaught on the UN and the WHO because of them not complying with an individual state’s interests and last but not least departure from the 5+1 unclear agreement with the Islamic Republic of Iran in order to force Iran for more concessions are all examples that indicate that the big powers or their commitments and accountability may no longer be trusted.

The most disastrous and heinous act in dastard assassination of Iran’s national hero and the international champion of fighting against terrorism, martyr General Ghasem Soleimani, and Iraq’s national hero, martyr Abu Mahdi Muhandis, and their companions and also the recent dastard assasination of noted Iranian defence and nuclear scientist Martyr Dr. Mohsen Fakhrizadeh, disclosed that the prepetrators and sponsors of state terrorism are not only untrustable but also they betray the high objectives of humanity like combating terrorism and saving the oppressed people. Rather, the entire world saw how the grateful people of Iran, Iraq, Syria and many other nations held such glorious memorial functions for those who had sacrificed their lives for them.

Hon’ble chairperson, ladies and gentlemen,
The Islamic Republic of Iran considers the Indian Ocean as gateway towards the world through the sea and we deem the Indian Ocean states entitled to all the blessings of this vast body of water including security and progress. Iran, due to its unique geopolitical and geostrategic position through its vast coastal line along the Persian Gulf, Sea of Oman and control over the strategic strait of Hormouz enjoys a distinguished position in the Indian Ocean as this vast body of water is the gateway towards Caucasus, Europe and West Asia and Iran is willing to use this advantage for the benefit, progress and security of itself and other regional countries. Therefore, we believe that this region must be governed via progressive and advanced security standards and the Hormuz Peace Initiative has respectively been proposed by the Islamic republic of Iran.

The Islamic Republic of Iran does not welcome militarization of the region and is concerned about unconstructive arms races, accumulation of weapons and transformation of the region into a weapons arsenal. Indeed such a phenomenon is a result of a malevolent and ominous conspiracy of some extra-regional hegemonic powers in order for them to sell more arms to regional countries for their own economic advantage and to prevent countries in the region from internal development as their limited resources would be wasted away by making extravagant military expenses.

Therefore, the regional countries must use more caution and we are of the opinion that by joining forces and strengthening our empathy we may collectively control and manage insecurity.
We believe that the Indian Ocean has high potentials for the global peace and it may serve as a role model for the rest of the world and this is achievable as a result of mutual cooperation and commitments, making initiatives and by use of logics and courageous acts.

Ladies and gentlemen,
What is important today for the region is collective security and progress on the basis of regional potentials, capabilities and strengths which must result from participation of all regional countries. It is a matter of criticism that why in spite of this vast, large and rich oceanic water, some littoral countries are facing underdevelopment because this would spark insecurity in the region as there is an undoubtable relation between development and security.

To overcome this challenge, we must benefit from the rich civilizational potential of littoral countries and involvement of affluent states for the management of this situation and resolution of the difficulties which would necessitate sociological, economic and cultural studies at the regional level besides foreseeing possible crises, harms and threats ahead of the region in the future, and thus they need to be pursued along with security and defense agendas.

Ladies and gentlemen,
We should not be indifferent towards the security developments in the region involving the Indian Ocean States as the insecurity in one place would impact the surrounding areas and beyond. For example the imposition of sea blockade on Yemen which is a stark case of maritime terrorism has stopped the arrival of pharmaceuticals and food stuff to the innocent people of Yemen and we are witness in the 21st century to a humanitarian catastrophe there. It is regrettable and history never forgets that this oppression against the people of Yemen is supported by some international organizations and this criminal act is perpetuated by taking recourse to a Resolution of the United Nations which is supposed to be safeguarding and ensuring global peace and security. This is while some big powers turn a blind eye to this crime in order to sustain their financial gains from selling arms and weapons.

It is duty of all of us to condemn such criminal acts and to bring an end to this blockade at the earliest and to facilitate reaching of humanitarian aids to the people of Yemen. It is expected that this subject be stressed and pursued in tandem with with other high objectives of this association or forum.

The experience of the Islamic Republic of Iran in fighting against terrorism shows that terrorism is like a contagious disease which would grow and develop anywhere it finds a breeding ground and powers like the US or the Zionist Regime would take advantage of terrorism as an instrument for imposing their influence or will on others.

While warning agianst the expansion of terrorism in this region and highlighting the necessity to foresee such crises, we express our readiness to share our experience and knowledge to other countries in the Indian Ocean region.
Ladies and gentlemen,

The Islamic republic of Iran, in order to further benefit from its maritime potentials and to ensure security in the Persian Gulf, Sea of Oman, and Indian Ocean region, has prioritized development of its maritime industry.

Besides, it has made huge investments along its southern coastal lines such as the Makran and Chabahar. On other hand, Iran intends to tie the potentials of this region in the South with the potentials existing in the Caspian sea in the North and to help to development of the latter region as well. In this journey, we hope to benefit from the experience and investments of other countries.
At the end, I once again declare the readiness of the Islamic Republic of Iran for active participation in the subjects concerning the Indian Ocean.
Thanks for your attention.