World Must Rap US Violation of Iranian Airspace: Rouhani 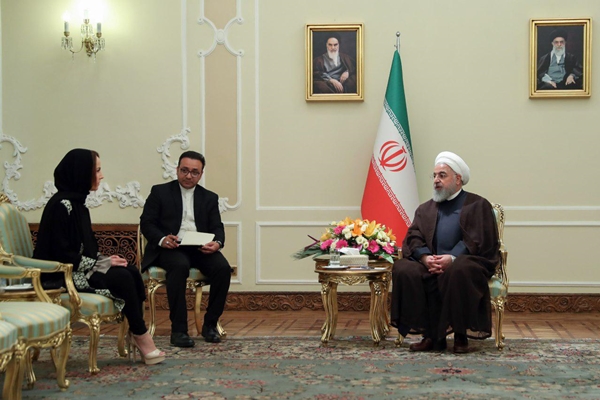 Iran’s President Hassan Rouhani has lashed out at a US spy drone’s recent incursion into the Iranian airspace, saying the world countries are expected to show a stronger reaction to the US’ violation.

Rouhani made the remarks in a Sunday meeting with President of the Inter-Parliamentary Union Gabriela Cuevas Barron in Tehran.

“The US recently violated Iran’s airspace with their UAVs and Iran’s defence forces downed a drone after it did not pay attention to multiple warnings. This region is a very sensitive and the security of the Persian Gulf and the Sea of Oman are important to many countries, so we expect all international institutions respond appropriately to this aggressive US action.”

He went on to say that during the past 17 years, US interventions in Afghanistan, Iraq, Syria and recently in Yemen have caused many problems, and Tehran believes the security of all regions of the world and the Persian Gulf must be provided by the regional countries.

Rouhani further said unilateralism is the main problem in the world today, and many of the regional and global problems are due to the dictatorship and bullying of some countries, especially the United States.

He noted that this dictatorship is rooted in violating international law and moving towards unilateralism.

Rouhani further noted that the Islamic Republic of Iran’s approach is to reduce tensions, to avoid any conflict between the military forces of the countries, and to develop peace and stability in the region and the world.

The president noted terrorism, unilateralism and environmental problems are among the problems of today’s world, and in order to overcome them, parliamentary and international cooperation must be developed.

Rouhani further stressed the Islamic Republic of Iran has always had good cooperation and close ties with the Inter-Parliamentary Union, saying that “it is very important to examine the important international issues and to hear the views of members of the parliaments of different countries at various meetings of this union to reach a joint conclusion.”

The Iranian president pointed out that the United States has launched economic terrorism against the Iranian people, and it even has imposed sanctions on pharmaceuticals and food.

For her part, Gabriela Cuevas Barron said the Islamic Republic of Iran has played an important role in the peaceful dialogue and resolution of conflicts and promoting multilateralism in the world.

She said the nuclear deal proved that multilateralism and interaction is very important to achieve peace across the region and the world.

“The JCPOA has a very strong content and today, the whole world knows that dialogue and engagement are crucial to achieve stability and peace,” added IPU president.

“Today, the world must learn from Iran’s successful experience and respect international negotiations and agreements.”

The IPU like Iran believes that unilateralism does not provide any solution to global problems, noted Cuevas Barron.

The IPU president said the JCPOA was a very good example of multilateralism in the international system saying “We hope Europe will comply with its commitments as soon as possible, because we believe people should not pay the price of other’s mistakes.”