Why are there 40 contenders for each parliamentary seat? 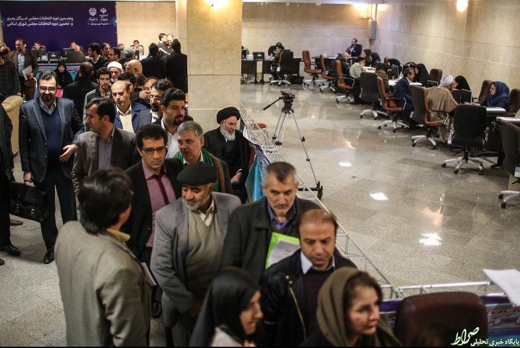 After registration of candidates for the upcoming parliamentary and Assembly of Experts elections came to a close, Interior Minister Abdolreza Rahmani Fazli said the number of hopefuls seeking to run for parliament is up 65 percent, while the ranks of those seeking a seat in the Assembly of Experts show a 62 percent growth.

That is how managing editor of Javanonline.ir Abdollah Ganji opens a piece in answering the question posed in the headline of this story. The following is the translation of the rest of his article which appeared online on December 26:

The following political and non-political factors seem to be the reasons behind the quantitative growth of parliamentary hopefuls:

2. With the elites making the rounds in different political periods, human development has gained traction and resulted in both experimental and scientific training of individuals. With their experimental and managerial experience, these people now have high levels of self-confidence and believe they can solve the country’s problems, legislative ones in particular.  That is why they have today thrown their hats in the ring.

3. The effectiveness of religious democracy is another motivational factor behind the candidacy of so many individuals. Indubitably, if the elites believed that parliament lacked real authority to make decisions, they would not enter the race because wading into an area which is ineffective  in nature runs counter to the principle of rationality. Hence, the effectiveness of parliament in the country’s political, social and economic equations is a significant factor in encouraging the hopefuls to register.

4. The fact that rivalry and competition are tough has brought all high- and mid-ranking members of different groupings into the race. In fact, the registration frenzy in one camp has resulted in the rush to registration in another.  In the parliamentary elections, registration is a competition in its own right ahead of the main competition in the balloting stations.

5. The fact that tickets have not been finalized and individuals remain hopeful to be placed on major tickets is another factor. Divisions in different groupings mean those who need to be screened are far from certain of being placed on tickets. So many jump in the race; it is more of a shot in the dark. As a result, many of those who fail to make the list of major parties, especially in big cities, are likely to withdraw from the race.

6. The factional breakdown of those who have signed up is not out yet. But some groups that vacillate on loyalty to the establishment believe a high level of registration would naturally increase the number of disqualified candidates. Consequently this can cause a human rights issue for the establishment and cast doubts on the democratic nature of the vote. When each faction’s share of candidates becomes known, judgment will be easier in this regard. The registration of people like Tabarzadi and Sholeh Saadi, etc.  reinforces this theory.

7. Some reformist leaders believe that candidates should enter the competition in layers (in force) so that even if a large number of hopefuls are declared disqualified, enough people remain in the race. This strategy can be implemented at the registration stage. The number of principlists in the constituencies is no fewer than the reformists though, their motive does not center on so-called layer unity. There are other regretful issues at play.

8. Motives such as finding an identity, upgrading one’s social dignity, psychological issues, as well as thirst for power have all played a role in the increase in the number of those who have registered. Of course, these motives cannot be attributed to renowned figures. They mostly apply to unknown or less-known individuals.

The Western media’s attitude toward groupings or candidates can be an index for better judgment of what was explained in items 6 and 7 above. BBC Persian has already launched an attack on Ayatollah Jannati and Mohammad Yazdi, and has started supporting reformists. To make a more definitive judgment more time is needed.