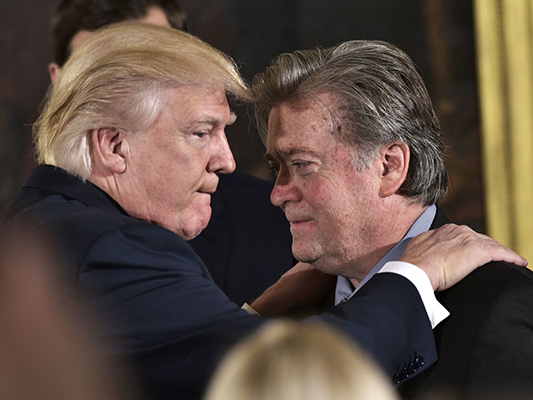 The Aftab-e Yazd newspaper, in its Sunday editorial, has discussed the resignation of White House’s chief strategist Stephen Bannon, the trend of such developments in the White House, and their possible impact on Tehran-Washington relations.

In the eyes of American men and women as well as other people across the globe, it would have seemed impossible that White House chief strategist Bannon leaves Donald Trump. Even the thought of such a separation would cross no one’s mind. But Trump has shown over the past six months that nothing is impossible for him, and that with his powers he can bring people to the top before sitting down and watching them fall. No sooner had Bannon tendered his resignation than special advisor to Trump Carl Icahn joined the individuals who had stepped down at 1600 Pennsylvania Avenue. The resignations of US officials on a daily basis indicate the country’s uncertain future.

Bannon, who political activists regard as the most dangerous politician in the world, has said, “Trump presidency that we fought for, and won, is over.” Bannon’s resignation was front-page news across the world on Friday as Trump had called Bannon a brain out of its skull. The director of Breitbart, the same website that promotes racist ideas and had ridiculed Barack Obama for the colour of his skin, believes populist slogans, traditional Republicans and also Trump’s family have triggered Bannon’s resignation.

Analyses by political experts suggest Bannon has fears about Trump’s shaky future, and indicate it is the very same fears which are to blame for the separation of his brain from the skull. Trump’s approval ratings have hit rock bottom following his mixed reactions to a rally by white supremacists in Charlottesville. Even high-profile Republicans such as Senator John McCain have expressed their hatred of Trump. This very development, analysts say, has led Bannon to return to the Breitbart website.

However, Ali Bigdeli, an expert on international issues and a university lecturer, believes Trump’s flip-flop approaches are the reason behind Bannon’s resignation.

“From the very early days when Trump took office, he was facing a kind of uncertainty in running the country because his flip-flop political behavior was not compatible with any of the American politics patterns. In particular, he had no political stability in areas directly under his control,” said Bigdeli in an interview with Aftab-e-Yazd.

“Based on the figures published by the White House, so far 25 senior officials have come to the Oval Office, but they stepped down or were fired shortly afterwards. That happened due to Trump’s political inexperience,” the analyst added.

“Such a vacillation in Trump’s decision-making in the US political arena over the past few days coupled with his mixed reactions to the recent racist conflicts has pushed his popularity down to 30%, i.e. lower than the approval ratings of all other US presidents. Now, there is talk of his impeachment,” said Bigdeli.

“There is uncertainty in the White House over whether or not Trump will have a fate similar to that of Nicholson, whether or not Congress will ask him to appear on Capitol Hill for impeachment and whether Trump will have to step down or the case will be referred to a court like that of Clinton. All these issues have prompted Trump’s associates to leave him” said Bigdeli.

Only 202 days have passed since Trump entered the Oval Office and a picture was released of him and his strategists. The bitter fact is that all but two of the men present at the office have either resigned or been fired. National security advisor Michael Flynn, White House chief strategist Steve Bannon, chief of staff Reince Priebus and White House press secretary Sean Spicer were members of Trump’s think tank. Vice President Mike Pence is the sole survivor of Trump’s strategists. Walter Shaub, former director of the Office of Government Ethics, Attorney General Jeff Sessions, Mark Corallo, the spokesperson for the president’s legal team, acting US ambassador to China David Rank and communications director Mike Dubke are but a few of the officials of the Trump administration who have resigned or been removed from their jobs.

Situation to Change if Trump Leaves

These Days the White House is being frequented by men who have either stepped down or been recruited. Radicals in the US government, i.e. those whose ideas were close to those of Trump, are leaving the 1600 Pennsylvania Avenue and being superseded by individuals who are trying to put Trump back at the helm of affairs. The development begs the question of whether or not the departure of radicals from the White House and the arrival of real Republicans will be in the interest of countries such as Iran.

“Trump and his associates belong to an offshoot of the Republican Party whose members are xenophobic and only care about white Americans. They are very dangerous and perverted. In my idea, even the departure of people like Bannon will result in no change in the situation of Iran. Trump himself belongs to the group of American radicals. It was Trump himself that initiated the Iranophobia scenario. Only the departure of Trump will tip the balance in favor of Iran,” said Bigdeli.