Where does Rafsanjani stand on the Shiite-Sunni issue, regional matters and Iran-Saudi ties? 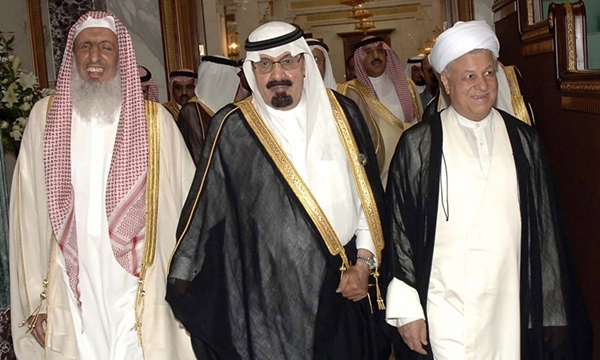 Ayatollah Hashemi Rafsanjani has said that the Shiites do not want to get involved in confrontation with fellow Muslims, adding regional Islamic countries can count on Iran as their best friend.

Chairman of the Expediency Council Ayatollah Akbar Hashemi Rafsanjani says that Iran and Saudi Arabia can work together to bridge the Shiite-Sunni divide plaguing the region.

In an interview with the Arabic-language daily Al-Vefagh, the top councilor talked about a wide range of issues, including his relationships with the Supreme Leader, Iran-Saudi Arabia ties and cross-border relations between Iran and Iraq. On July 5, Alef.ir published a Farsi version of the interview. The following is the translation of PART THREE of the interview which focuses on the problems and prospects of Tehran-Riyadh ties:

This [the release of diplomatic memos by the whistleblowing website WikiLeakes] is a harmful trend. Similar information leaks dealt a blow to the US too. The one behind these leaks is now being used as leverage. Saudis have suffered as a result of these leaks, apparently more than others.

Saudi Arabia is a closed country [to the outside world] with its foreign relations, talks, correspondence and documents remaining unknown [to the public]. No one knows what is going on inside the kingdom. When Saudi information was leaked, it played into the hands of those who sought to tell lies, citing the faked versions of these leaked documents. They [those taking advantage of the leaked information] tell what they want and deliver a blow [to the kingdom] anytime they wish. They make a comment and it takes time before Saudi officials deny their comments. As a result people buy that.

Sedition surfaced at one point and snowballed. Saudi Arabia has to pay a dear price for the leaks, with the negative impacts of such leaks not diminishing anytime soon. The positive measures it [Saudi Arabia] has taken are not publicized, but its incorrect decisions are blown up [out of all proportion].

I have no idea about any possible relationship between Saudi attacks in Yemen and Iran’s nuclear talks! In the new group which has come to power in Saudi Arabia, I only know Salman. I saw him at a party in Riyadh. He had invited me and we talked. That’s it. I do not know the other newcomers. […]

I don’t know why they [the Saudis] made such a mistake [airstrikes on Yemen]. They did so because they apparently thought the Houthis were Shiites. The Houthis, however, are not twelve-Imam [Twelver] Shiites; they are mainly four-Imam Zaidiyyahs. If the Saudis are worried about the Shiites, they should be worried about Iran, Lebanon, Iraq, Syria and a large number of other [Muslim] countries.

They made a big mistake in Yemen. Bahrain is a good example [of Saudi mistakes]. The Saudis deployed forces in Bahrain, which is an Arab nation and a member of the Persian Gulf Cooperation Council, to fight against the Shiites. Accordingly, they have concerns in Yemen, especially because the Yemenis have territorial claims on the kingdom. I do not know their exact motives. Perhaps they’ve been provoked to do so. If [the ousted president] Mansour Hadi had been able to stay [in power] in Yemen, he would have remained there. How can he build on Saudi assistance to cling to power?

Saudi Arabia and a nuclear deal

If the Saudis are concerned about the agreement Iran is likely to clinch with P5+1, they need to act in good faith when it comes to such a deal. Saudi Arabia and other regional countries are making a mistake. Iran has banned [the development of] nuclear bombs. Why should they be afraid of us? They should be afraid of Israel.

The Saudis have bought 3,000-km range missiles from China and other countries. They possess highly advanced hardware such as planes, missiles and radar systems. They also have a military base there [in Yemen]. Saudi Arabia knows that Iran does not pose a threat. If Iran had intended to cut ties with Saudi Arabia, it would have made an issue of the killing of more than 400 Iranian pilgrims at the 1987 Mecca incident [at the hands of Saudi police during Hajj rituals], but Iran behaved differently only to help mutual ties with the kingdom remain unstrained.

Ties between Iran and post-revolution Egypt

Why Iran and Egypt do not have balanced relations [even after an Arab Spring revolution in Egypt and the rise to power of two presidents] is a question the Egyptians should answer, because Iran is seeking to develop ties. We see the Egyptians as people who love the household of the Muslim Prophet. We have no problem with the Egyptian people, especially because we are not neighbors to have [border-related] issues.

There are reasons behind such [cold] relations: First, the Americans, who hold sway in Egypt and support its army, do not approve of Tehran-Cairo ties; Second, Egypt has to cooperate with Saudi Arabia and some other countries; and third, Egypt disapproves of Iran’s presence in Syria, Lebanon and recently in Iraq. We faced similar problems in Afghanistan. They [the Saudis] supported the Taliban and Iran frowned upon their support. I personally talked with King Abdullah, telling him that Riyadh was making a big mistake.

The threat of a religious war in the region

We are now at a [critical] time with the Shiites under attack in certain regional countries. They treat the Shiites as their rivals, trying to undermine the Shiites in different ways, but the fact is that the Shiites pose no threat or challenge to them.

According to Shiite politics and mindset, they [the Shiites] do not want to get involved in confrontation with their fellow Muslims. It is a big mistake on the part of some regional countries; instead they can count on Iran which is their best friend. Presently I sense danger, and fear that the mounting differences which sometimes lead to the killings [of Muslims in this region] could deepen [even more].

A few years ago when the previous government was in office, I traveled to Saudi Arabia. I was asked to settle the issues Iran had with Saudi Arabia during my visit. After a dinner banquet hosted by King Abdullah, we talked until past midnight. The king’s close advisors, including his foreign minister and Prince Muqrin and others, were also on hand for the meeting. We discussed the differences and arrived at a solution: formation of seven joint commissions.

The first commission was to deal with religious affairs; in other words, the clerics from the two sides were supposed to hold meetings to discuss and work out solutions to the differences between the Sunnis and Shiites. The officials in two countries too were expected to support the viewpoints of the commission so that the problems standing in the way could be removed.

The second commission was tasked with handling mutual ties and cooperating with the executive commission. We also decided to hold one joint commission for Lebanon, one for Syria, one for Iraq, one for Afghanistan and one for other countries. These seven commissions were to meet on a regular basis and bring the viewpoints of the two sides closer together, and the two countries’ high-ranking officials were to supervise the performance of these commissions.

It was a sound decision we made to remove the differences in the region. After I came back to Iran, I realized that those who were to pursue these affairs were unwilling to make them happen. Later [then Saudi Foreign Minister] Mr. Saud Al Faisal came to Iran to pursue what we had already decided on. His first trip was somehow successful, but then everything fell apart due to the problems they had in the kingdom and we faced here in Iran.

I’m sure that if we initiate a joint plan with Saudi Arabia, we can bridge the differences between the Shiites and Sunnis all over the Islamic world. For instance, in Syria which is an independent country, neither Iran nor Saudi Arabia is allowed to fix the destiny of the Syrian people. We should remain vigilant not to allow Shiite-Sunni differences to emerge in that country. We have to let the Syrian government and people solve their own issues. We can simply help them settle their problems.

This holds true for Iraq, Lebanon and other [Muslim] nations. I think even now we can revive what we decided almost six years ago and work out a solution [to Muslim differences] in line with the current situation in the region.