What CEOs of Total, Airbus, Renault and Peugeot told Rouhani? 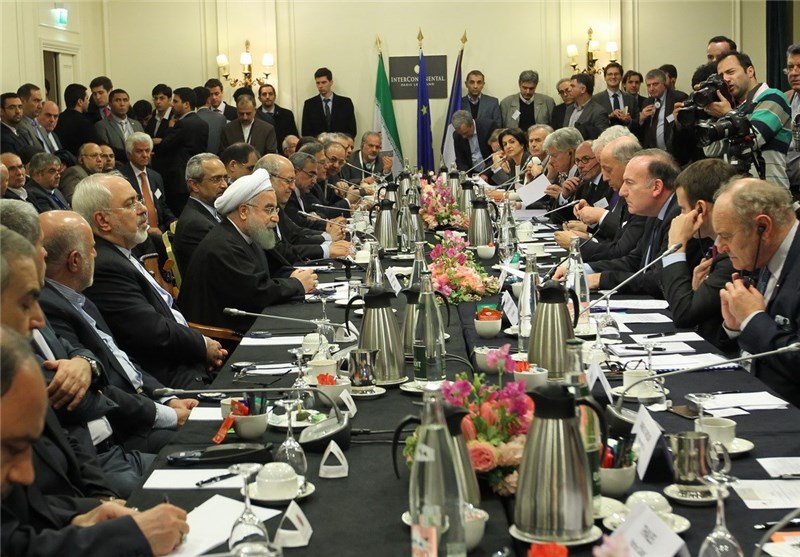 Iranian President, Hassan Rouhani, met with CEOs of major French companies as he arrived in Paris on Wednesday afternoon.

Welcoming Rouhani’s visit to Paris, Foreign Minister, Laurent Fabius, said France and Iran have had historical ties and today we should begin a new chapter in our cooperation and extend it to all levels.

“Iran is a great country with bright future and today major French companies are determined to begin widespread cooperation with the country”, said Fabius.

While stressing needs for securing investment, he said 10 years ago cooperation with Iran was among 10 top insurance coverage of French government and at the moment, we are interested to use every investment channel to revive the economic ties between the two countries.

All the representatives of French businesses in economic infrastructure, aviation, airport, and railways and energy sectors are ready to participate in Iranian market, said the French economy Minister.

During the meeting, some of French executives in brief statements, expressed interest and willingness to involve in making investment and taking part in development of Iran’s all economic sectors.

Head of Total told Rouhani the French oil giant has been present in Iran for years and the lifting of sanctions paves the way for Total to resume its activities in Iranian energy sector.

Airbus Chief Executive, Fabrice Bregier, who was part of the French delegation, said Airbus eyes to supply Iranian aviation needs and is ready to equip Iran’s airlines as well as offer training and maintenance services.

Renault representative recalling his firm cooperation with Iran in the past, said Iran is one of the few countries in the world with national automobile industry and has a strategic place in Renault’s plans. He continued by saying: we never breached our commitments toward Iran and we are interested in boosting our cooperation with all Iranian automakers.

Also head of French Suez Company which operate in environment field expressed his hope to return to Iran and added we could have cooperation in supply and efficient use of water reserves as well as desalination in Iran.

Emphasizing on telecommunication cooperation record of Orange with Iran, Head of French telecoms firm told Iranian President: we always seek to expand our ties with Tehran and we have no limit to interact with Iranian counterparts and transfer of technology.

Welcoming Iranian President’s visit to his country, Alstom Chief said the French multinational company is one of top global companies in train coaches manufacturing and railway construction and is ready to invest and transfer its technologies to Iran.

Meanwhile, head of Sagem expressed his company’s interest in maritime and port terminal cooperation with Iran.