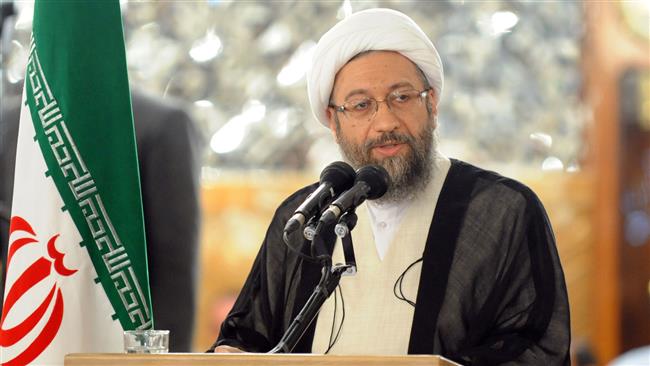 Not only have the Western countries turned a blind eye to the deadly Saudi aggression against Yemen but also defended the bloody campaign, Ayatollah Sadegh Amoli Larijani said.

Larijani said on Monday that not only have the Western countries turned a blind eye to the deadly Saudi aggression against Yemen and brutal killing of civilians in the impoverished country, but also defended the bloody campaign.

While Saudi Arabia continues to support terrorist groups such as IS and al-Qaeda in the region, the West accuses Iran of human right violations, the Iranian judiciary chief said.

He, however, emphasized that Iran would pursue human rights principles based on Islamic values and will never “submit to the human rights that the Westerners set for us (Iran).”

The judiciary chief further pointed to Saudi Arabia’s death sentence against prominent Shiite cleric Nimr al-Nimr and said Riyadh insists on the execution of an outspoken clergyman while nobody voices any opposition.

Sheikh Nimr was attacked and arrested in Qatif in July 2012, and was charged with undermining the kingdom’s security, making anti-government speeches, and defending political prisoners. He has denied the accusations.

On October 25, the Saudi Supreme Court upheld a death sentence issued against the cleric last year. The execution warrant will be sent to Saudi King Salman bin Abdulaziz Al Saud to be approved and then carried out. The execution of the Shiite cleric can be carried out by the Interior Ministry without any prior warning if the Saudi king signs the order.