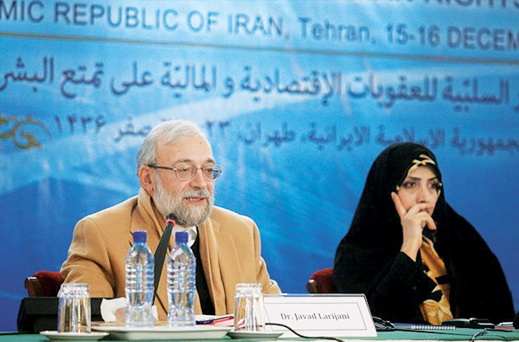 The secretary of Iran’s Human Rights Council says Iranians put their weight behind President Rouhani’s government regardless of the result of nuclear talks with P5+1.

The secretary of Iran’s Human Rights Council says the sanctions the West has imposed on Iran are meant to show to the world that the Islamic Revolution is an unsuccessful experience, adding these sanctions havefailed [to produce the intended results].

On December 16, Hemayat newspaper said Mohammad Javad Larijani made the comment at an international seminar on “The Negative Impacts of Economic and Financial Sanctions on the Full Enjoyment of Human Rights” which was attended, among others, by Tehran-based foreign diplomats. The following is the translation of what he said in the conference and later to reporters on the sidelines of the gathering:

Islamic countries should ruin the monopolistic atmosphere of liberal democracy which dominates documents governing human rights. Seventy years ago, Western countries drew up these documents in the absence of Muslims. Now you feel that Islamic wisdom, philosophy, literature and logic are missing in these documents. This is a downside of the documents and amounts to injustice to humanity.

Over time this shortcoming has been highlighted and the world of Islam has become aware that it should be given a role in [establishing] the rights mechanisms and procedures and [producing] documents.

The absence of others when these human rights documents and texts were being drafted led to a misconception about the universality of human rights, one which says the whole world should live based on the rationality of liberal democracy. However, this is not universality [of human rights]; rather it is sheer imposition. Universality means participation and interaction by all countries and consideration of multicultural human rights.

It is high time that Islamic countries worked with the Organization of Islamic Cooperation to break the imposed unilateralism, which is called “universality”, to serve the interests of the world of Islam and humanity alike. If so, it would allow other cultures and lifestyles which are suffocating in the liberal democracy to breathe and get rid of the Western-imposed universality.

The question of human rights is not something which the West has given to humanity as charity. The Islamic nations consider human rights an issue which has its roots in the holy Koran and religious teachings, and the Koranic words prove what we say, because God Almighty says, “We created man and bestowed upon you dignity”. This is not charity; rather, it is the God-given right of people.

Any attempt to impose bans and restrictions on people’s rights to life, lifestyle, and development – which are humans’ main rights – is breach of human rights and runs counter to all international texts and documents.

Islamic countries are entitled to choose their way of life – either in public places or in their private lives – based on Islamic wisdom, and nobody has the right to impose on them a special style, including liberal democracy. The Islamic Republic of Iran, for instance, has chosen over the past 35 years the current style based on Islamic wisdom and as a result has pulled off remarkable success on all fronts.

The West has slapped tough, inhuman sanctions against the Islamic Republic only to bar it from making progress and deal a blow to Iran’s efforts to establish a political-civic system based on Islamic wisdom. The sanctions have failed [in their objectives] and Iran is moving forward and will continue to move farther.

Although Iran has steadfastly resisted the inhumane sanctions, the resistance and sustenance of the Iranian nation does not give legitimacy to their anti-rights and inhuman measures. If they intended to block Iran’s progress, they have failed in their attempts. There’s no doubt that these sanctions are illegitimate and in full contravention of the main human rights documents.

Iran enjoys rich human resources and has good relations with all countries; denying it the right to tap into the world’s plentiful potential is not right. For some governments, ties with the world become meaningful when they have relations with Paris, London and Washington, but it is not the case for Iran which puts ties with its neighbors above relations with the West. For Iran, the world is not confined to the West; it does not start with or end in the West either.

As for the right to development, I should say that Iran is the most developed country in the Middle East despite massive sanctions imposed by the West, and it is satisfied with its achievements in nuclear, Nano and stem-cell technologies.

A-bomb, an excuse to block scientific and technological progress

Iran is not after A-bombs for two reasons: First, Iran is powerful militarily and atomic weapons have no place in its defense doctrine. Second, a fatwa by Supreme Leader Ayatollah Khamenei has banned [the production and use of] such weaponry. To us, fatwas are more important than the law.

Claims that Iran is seeking to develop an atomic bomb are an excuse [for the West] to stop Iran from making scientific and technological gains. The Western governments openly say that you have made too much progress. They are defining a basis beyond which countries like Iran will not be allowed to go.

Iran does not bow to bullying because none of the texts on international human rights have talked about limited development. Our talented students are expelled from European universities. They have even dismissed students studying in non-nuclear fields, claiming that their research could be used for nuclear purposes. This is outrageous, because preventing people from learning sciences is the grossest rights violation.

Time has come for us to get involved. Human rights should be up for discussion in Muslim nations. They should get involved and replace the Western unilateralism with Islamic wisdom and multicultural human rights, and introduce a new concept of human rights universality to the world.

On the sidelines of the seminar, Larjani said pressures are likely to build up

We will continue to support the government whether or not the nuclear talks produce results. I’m not optimistic about the extension of the talks. I think the West will pile up more pressure on Iran in the extended time. The Iranian nation and officials support President Rouhani’s government in the nuclear talks.

Iranian negotiators are well-experienced diplomats. All of us like to see the talks are conclusive, but we should not forget that two parties are involved in the talks. The other party includes the acquisitive US administration and certain European governments. If the talks break down, the acquisitiveness of the other party is to blame, and the fault does not lie with Iran.

Senate torture report was a counterattack by Democrats

The Senate [Intelligence Committee’s] report on the CIA torture program was a counterattack by Democrats against Republicans. Democrats are no different from Republicans as far as the question of human rights go. The torture report is incomplete. The rights of Americans and other nations are being violated extensively. Unfortunately, the biggest rights violators have raised its flag and try to forcibly dictate the Western liberal-secular mindset and lifestyle to the world.

We’ve had no doubt that the West, the US included, are the main rights violators. There are many reasons why the Senate report came out. Reports that the Western government officials violate the rights of Americans and other nations are plenty. The disclosure of the torture report is the result of bipartisan infighting.

Time is ripe for the world of Islam to step forward, because people’s basic rights are trampled upon.

Serious defects in the UN mechanisms are to blame for the sanctions Western countries have imposed on Iran. Our mission is to correct those mechanisms, because the world today is like a neighborhood in which bullies blackmail others. The Islamic Republic is a good example of resistance against bullying for which it has been rewarded.