We need to form a strategic coalition with powerful Iran 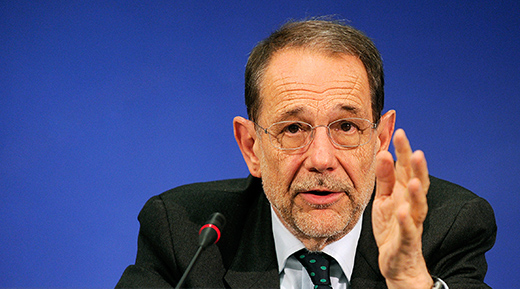 Javier Solana has said that conclusion of a nuclear deal will bring about fundamental changes for Iran and the wider region.

Javier Solana, a former EU foreign policy chief, has said that Iran is the only country which is ready and powerful enough to take on ISIL terrorists, adding we need to form a strategic coalition with Iran which is the most powerful country in the region.

Solana made the remark in a speech at a conference at the European Council on Foreign Relations (ECFR) [a pan-European think-tank which conducts research and promotes informed debate across Europe on the development of a coherent and effective European values-based foreign policy] in Brussels.

The Islamic Republic News Agency published excerpts of Solana’s remarks. What comes below is the translation of what according to IRNA As-Safir (The Ambassador), a leading Arabic-language daily newspaper in Lebanon, quoted him as saying:

Solana said the Saudis are not ready to take on a role in efforts to counter ISIL, adding they are engaged in Yemen [a reference to the Saudi aggression against Yemen] and are not seeking to get involved in defeating the terrorist group.

Egypt too is busy defusing its infighting and cannot play an effective role in the fight against terrorism, he said, adding Iran is the only remaining country [in the region which can have a role] especially after signing a nuclear deal [with P5+1] which will increase its role significantly.

The former EU foreign policy chief went on to say that the state of affairs in Iran and the entire region will change fundamentally after the conclusion of a nuclear deal, adding the deal will also meet with strong reactions.

The talks are likely to continue as long as a nuclear deal is produced, Solana said, adding Saudi Arabia is the first side which shows negative political and economic reactions to a breakthrough nuclear deal.

He further said the Saudis will pile more pressures on the US and the EU in order to prevent Iran from turning into a key regional player, adding this will be a big battle.

Economically, the Saudis can also jeopardize the oil market to cause Iran’s oil revenues to drop and disrupt its exports after the removal of sanctions.

Francisco Javier Solana de Madariaga is a Spanish physicist and Socialist politician. After serving in the Spanish government under Felipe González (1982–1995) and Secretary General of NATO (1995–1999), he was appointed the European Union’s High Representative for Common Foreign and Security Policy, Secretary General of the Council of the European Union and Secretary-General of the Western European Union and held these posts from October 1999 until December 2009.
› Subscribe
Share
Facebook
Twitter
ReddIt
Email
Print
Telegram
WhatsApp
VK
LINE
Viber