Vienna agreement increases hatred for US in Iran: Basij commander 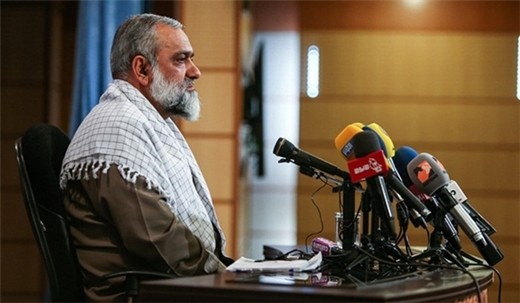 The US needs the agreement merely to legalize the sanctions and continue pressure against Iran, said Brigadier General Naghdi.

Commander of Iran’s Basij (volunteer) Force Brigadier General Mohammad Reza Naghdi warned of Washington’s continued animosity towards the Islamic Republic, and said the contents of the last Tuesday nuclear agreement between Tehran and the world powers in Vienna boosts Iranians’ hatred for the US.

“Any Iranian who reads the Vienna documents will hate the US 100 times more (than the past),” Naghdi said on Tuesday.

He also referred to the UN Security Council’s Resolution 2231 approved on Monday, and said, “All paragraphs of the resolution that the US proposed to the UNSC are full of enmity toward Iran and show the US deep grudge against the Iranian nation.”

Addressing worshippers in the Eid al-Fitr (marking the end of the holy month of Ramadan) prayers in Tehran on Saturday, Supreme Leader of the Islamic Revolution Ayatollah Seyyed Ali Khamenei underlined the agreement between Tehran and the six world powers (the US, Russia, China, France, Britain and Germany) will not change Iran’s policy toward the US.

“In any case the policy of the Iranian nation and the Islamic Republic system vis-à-vis the US will not change,” Ayatollah Khamenei said.

Iran’s Supreme Leader reiterated that whether the text of the nuclear agreement is ratified by the Iranian parliament or not, Iran will continue supporting the oppressed Palestinian nation, Yemen, Bahrain as well as the nations and governments of Syria and Iraq and the honest warriors of Lebanon and Palestine.

Ayatollah Khamenei reiterated that Iran’s policy toward the US will never change.

He said that Islamic Iran will never yield to excessive demands of the enemies while safeguarding its defensive and security capabilities.