The US seeks regime change; deal is impossible 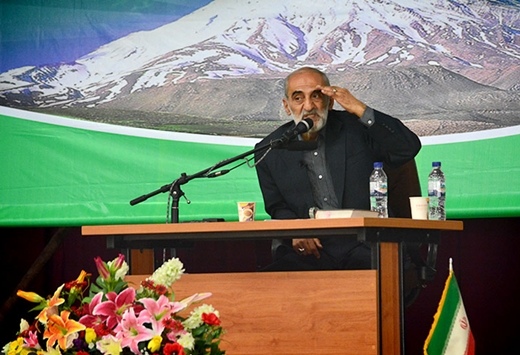 Kayhan’s Hossein Shariatmadari has said that accepting what has been included in the Lausanne agreement will set the stage for the US to take military action [against Iran].

Iran’s nuclear dispute with the West which has dragged on for 12 years is nuclear by name only. It does not merely revolve around nuclear issues. Iran is after a satisfactory agreement, but in this dispute the US is looking for an excuse to pursue its regime change policy vis-à-vis Iran.

This is part of remarks made by Hossein Shariatmadari, the editor-in-chief of Kayhan, a principlist daily, in a conference on the opportunities and challenges of the Islamic Revolution in Sari on Thursday.

Without doubt, conclusion of a nuclear deal is a zero possibility, Shariatmadari said, citing what the US seeks to get out of nuclear talks [regime change]. The following is the translation of excerpts of his remarks in the conference and the answers he gave in response to the questions of some participants:

The Americans know that none of their dreams will come true thanks to the Supreme Leader’s tactfulness, even if they got the [Iranian] negotiating team to make promises and imposed some commitments on them through deceitfulness and gamesmanship.

A question arises here as to why the US is insisting on its demands? If we admit that the United States has problem with the existence of an Islamic Iran, we will not look for an answer in the [nuclear] agreement; rather, we can clearly see traces of a regime change project.

Military option is just a big and hollow bluff to intimidate us. Today this region has turned into a window of the back-to-back defeats of the US and its allies in Afghanistan, Iraq, Palestine, Lebanon, Syria, Yemen, etc.

God forbidden, if we gave in to what has been mentioned in the Lausanne agreement, that would set the stage for the US to take military action [against Iran]; in other words, it is exactly against the views of those who say the agreement would help prevent a military attack.