US Suffering from Disease of Addiction to Sanctions: Iran

Iranian Foreign Minister Mohammad Javad Zarif says the United States is addicted to applying sanctions on Iran and other countries.

“I believe there is a disease in the United States and that is the addiction to sanctions,” he told CNN in an exclusive interview conducted on the 65th anniversary of a US-backed coup that overthrew the democratically-elected Prime Minister of Iran Mohammad Mosaddeq.

“Even during the Obama administration the United States put more emphasis on keeping the sanctions it had not lifted rather than implementing its obligation on the sanctions it lifted,” Zarif added.

Zarif further noted that the nuclear deal could be revived regardless of the Trump administration’s denunciation of it.

The Iranian top diplomat expressed his dismay that the United States has not learned that sanctions are ineffective in changing the political climate in Iran.

“We felt that the United States had learned that at least as far as Iran is concerned, sanctions do produce economic hardship but do not produce the political outcomes that they intended them to produce, and I thought that the Americans had learned that lesson. Unfortunately I was wrong,” Zarif said.

He said the same ’50s thinking embodied the current US approach. “I think the US administration still believes that it is working with the government it installed in Iran after the 1953 coup,” he said. “As they say, they have to wake up and smell the coffee.”

Zarif also noted that pressure from the European allies could persuade Trump to change his mind and accused the United States of “bullying” the European signatories to the deal.

“We do not want to revisit that nuclear deal,” he said. “We want the United States to implement that nuclear deal. Today the closest US allies are resisting those sanctions. The US basically arm-twisting — its attempt to put pressure. I don’t want to use the term bullying … [but] that’s what it amounts to.” 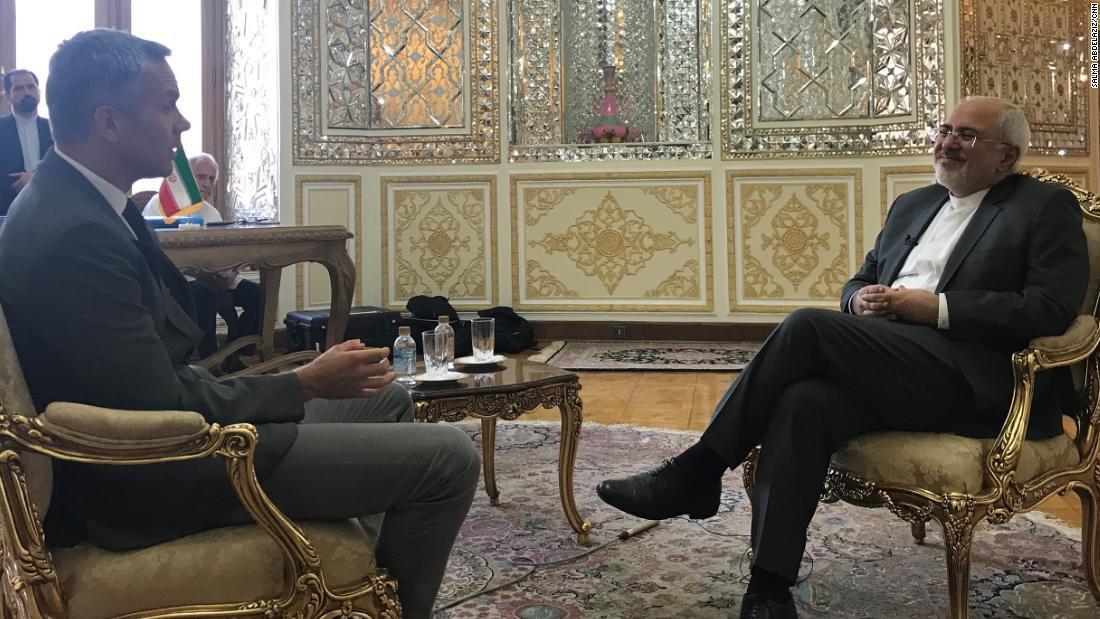 Asked whether Iranian President Hassan Rouhani could have a one-on-one meeting with President Trump — as Trump has preferred to tackle North Korea and Russia — Zarif said the previous nuclear deal had to be respected first.

“Not when the previous huge progress that we made was thrown out,” he said of a one-on-one. “That [previous deal] was for us the litmus test of whether we can trust the United States or not.”

Would a lasting pact ever be possible with the man who wrote about the “art of the deal”? “It depends on President Trump — whether he wants to make us believe that he is a reliable partner,” he said.

“Now if we spend time with him and he signs another agreement. … How long will it last? Until the end of his administration? Until he departs from the place where he put his signature on the agreement?”

Zarif further noted that decades of pressure meant the Iranian people would be resistant to this pressure, yet it would have an impact.

Zarif said the recent economic problems, which have seen the local currency slide and fruit and vegetable prices sometimes double, were due to preparatory measures being taken. “The economic upheaval that you see right now in Iran is because of the measures that needed to be taken to be prepared for those days, so we are prepared for the worst case scenario,” he said.

“We spent a lot of time” he said, of the years-long, intense and detailed negotiations that he and then-US Secretary of State John Kerry led. “It was not an easy political decision for the Iranian government and for me personally and for President Rouhani. It may be a credit for some foreign ministers to spend hours upon hours with the US secretary of state but it’s certainly not a credit in Iran.”

Yet he accepted, “That’s what diplomats are for. Part of our salary is to take personal hits for following national interests — that’s what our job is.”