US Plan to Cut Iran’s Oil Exports Down to Zero Not Feasible: DM 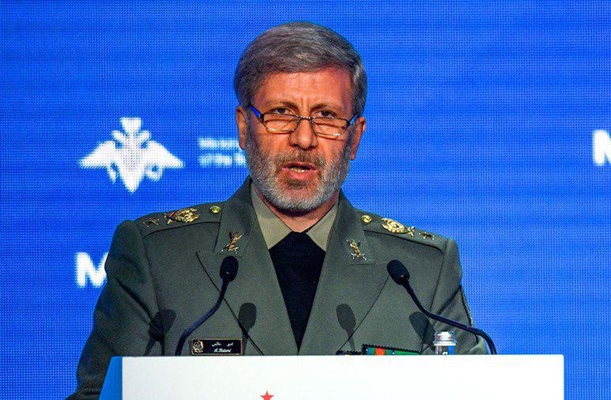 Iran’s Defence Minister says the inhumane goal of the American regime to cut Iran’s oil exports down to zero is not feasible, and the Islamic Republic of Iran preserves all rights to use defensive measures against the US economic terrorism.

In an address to the eighth edition of Moscow Conference on International Security on Wednesday, Brigadier General Amir Hatami said traditional Western powers suffer from a lack of ability to understand the mechanism of today’s changes.

“Amid the current situation, I think the US claim to drive Iran’s oil exports to zero is almost impossible,” he was quoted as saying in a report by the government’s official website dolat.ir.

He underlined that without a correct and realistic understanding of today’s world, it is impossible to restore peace and security throughout the globe.

“Arrogant security, selfish security and self-oriented security are part of a special understanding of security which gained momentum after the World War II,” he said.

The Iranian minister referred to the latest brutal US sanctions on Iran as part of such an understanding of security and added racism, ethnic and religious extremism and terrorism are the fruits of such understanding.

“The US brutal sanctions have inflicted heavy damages on Iran’s economy but failed to deter the strong will of the Iranian nation. They are determined to follow up with their sacred causes,” he said.

He also noted that the sanctions have unveiled the true face of American regime particularly amid the recent floods which hit our country,” he said.

Elsewhere, the top general cited Trumpism as today’s Nazism and said sitting idle with the hope that the current problems will be removed in the future is a simplistic view.

“Such an approach will lead the world to a gloomy future. So, this is the time to prevent the emergence of a new Hitler in the world,” he said.

The Iranian minister then cited ISIS as the result of such an approach towards security in the world and said the terrorist group was dismantled only through self-sacrifices made by Syrian and Iraqi governments and nations as well as the unconditional support of the Islamic Republic of Iran and Russia.

“Though ISIS has been removed today, insecurity, arrogance and occupation are still alive and there are appropriate grounds for the terrorists’ revival,” he noted.

He blamed foreign interference as the main reason behind shattering of peace and security in Iraq and Syria and added the foreign forces are creating chaos in the region through their meddling in the internal affairs of the regional states.

Brigadier General Hatami stressed that today, the world’s arrogant powers have turned the Middle East into their arsenals, while the Islamic Republic of Iran maintains there is no way but a political solution for the current crises in the region.

He then expressed regret that some states have intentionally closed their eyes on the brutality imposed by the US on the Iranian nation and said the Islamic Republic warns them that the repercussions of their silence will embroil them in future.

The Iranian official also described the US’ move to blacklist Iran’s Islamic Revolution Guards Corps as a terrorist organization as racist and shameful and said the IRGC has served as a pioneering unit in fight against terrorism in the Western Asia. “Meanwhile, the Islamic Republic of Iran has always been the main victim of terrorism over the past decades.”

The eight Moscow Conference on International Security organized by the Russian Defence Ministry kicked off Wednesday in the Russian capital.

The two-day event is focused on difficulties in global and regional stability, reconstruction of Syria and Iraq, as well as various security issues in Europe, Asia, Africa and Latin America.

It is also expected to discuss missile defence issues, deployment of weapons in space, international peacekeeping activity and new approaches to military cooperation.

Over 1,000 people have arrived to attend the forum including defence ministers, chiefs of staff of armed forces, delegations from defence ministries and experts from 111 states as well as leaders of such international organisations as CIS, CSTO, SCO, UN, OSCE and ICRC.