US, Israel Pit Regional States against Each Other: Zarif 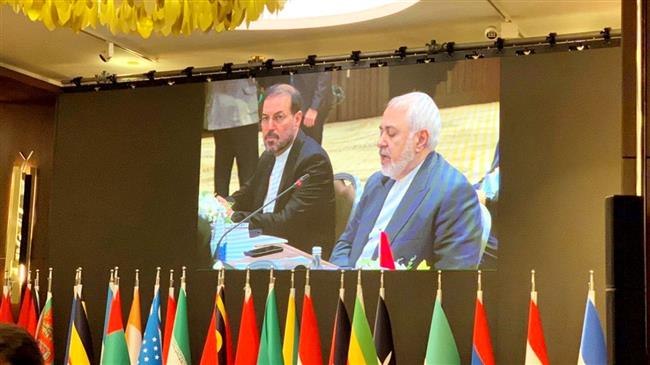 Iranian Foreign Minister Mohammad Javad Zarif says the US and the Israeli regime pit regional states against each other in order to “eclipse” the plight of Palestinian people.

Zarif made the remarks in an address to the Meeting of the Non Aligned Movement Ministerial Committee on Palestine, held on 23 Oct. 2019, in Baku, Azerbaijan Republic.

He also blamed the US for its contempt for international law, saying the administration of Donald Trump is aiding and abetting Israel to promote its expansionist policy.

“The extremist and unilateral policy pursued by the US coupled with its contempt for international law has had a devastating impact on the Palestinian people,” he said.

“The Trump administration is aiding and abetting the aggressive Israeli regime in its expansionist behavior, which seeks to undermine the status of the Palestinian issue as the pivotal issue in the Middle East,” the Iranian top diplomat noted.

The holding of the meetings of the NAM Committee on Palestine has acquired particular importance given this moment of great uncertainty and volatility for the Palestinian people.

The extremist and unilateral policy pursued by the US coupled with its contempt for international law has had a devastating impact on the Palestinian people. The Trump administration is aiding and abetting the aggressive Israeli regime in its expansionist behavior which seeks to undermine the status of the Palestinian issue as the pivotal issue in the Middle East. The most important reason for the US administration and the Israeli regime to ignite hostilities within and among the countries of our region and to push the non-issues such as Iran’s peaceful nuclear program, is to eclipse the plight of the Palestinian people and force a regional realignment to its detriment. What is indeed extremely regrettable is that some States in our region are buying this trick, thus furthering the agenda of the US and the Zionist regime. It is of great importance that the NAM countries maintain and strengthen their united front and do not allow the Zionist regime and its enablers to succeed in their aim of relegating the Palestinian question to the margin.

The US vicious moves about al-Quds al-Sharif and the creation of a viable Palestinian State despite the clear UN resolutions are frustrating and detrimental to the efforts towards finding a just and lasting solution for the crisis. While none of the US administrations in the past ever intended to help Palestinians create a viable States, this administration has taken off the mask and pursues the same policy in an aggressive and shamelessly transparent way, providing more encouragement to the expansionist Zionist regime.

Netanyahu’s recent declaration to annex the Jordan Valley in the Occupied West Bank should be also viewed in this light. This provocative threat followed previous similar cynical declarations about the annexation of other Israeli illegal settlements. It came in the wake of the Israeli attempts to illegally and forcibly alter the demography, character, identity and legal status of the Palestinian territory occupied in the past seven decades.

This disastrous trend will continue unless we change course. We all need to brace ourselves and tap all our resources and potentials to stand firm—not just in our declarations, but in our policies and actions—against aggression by the Israeli regime and their American enablers. The resolute rejection of the delusional “deal of the century” by the Palestinian people and leadership has already shown its impact, imposing a setback on those who have tried in vain to denigrate the rights of an entire people to a real estate deal.

Washington and Tel Aviv should be made to understand that peace and economic prosperity could never be achieved without addressing the occupation, which lies at the core of the Palestinian question. They are being increasingly isolated at least in their delusion that the Palestinian right to self-determination, Palestinian sovereignty and statehood could be exchanged with their empty financial promises. Undoubtedly, any initiative detached from international law and dismissive of Palestinian human and political rights can neither be viable, nor just, and will certainly fail abjectly.

At this difficult moment for Palestine, it is imperative that we, as NAM Member States, act on what we have said since the birth of our Movement. The illusion that Israel and the United States can be reliable partners must be abandoned.

We in Iran are ready to set aside all our differences and grievances with any and all Muslim and Non-Aligned countries and work hand in hand to create a strong unified stance to reverse the exacerbating audacity of the Zionists. It can be done.