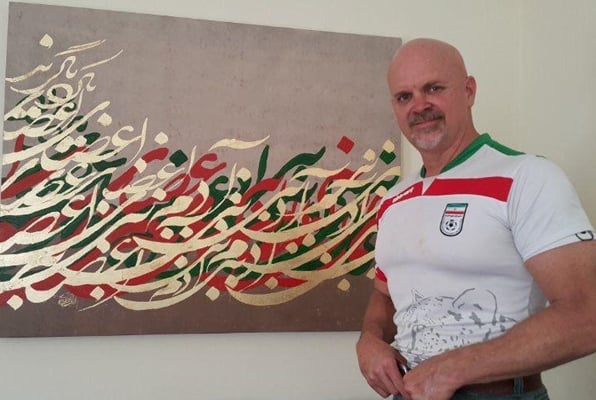 Gary Lewis, the UN’s former coordinator in Tehran who is now serving in Kenya, recently praised the Iranian national football team for its impressive performance at the FIFA World Cup, showing how much he still cares about the Iranian nation and their feelings.

In a post on his Twitter account, Lewis praised the Iranian team’s members for their dramatic match against Spain and described himself as one of the ardent fans of Iran in the FIFA World Cup, which underway in Russia.

“Great game; totally enjoyable! We were unfortunate to lose. And to lose 0-1 to a team like Spain is no dishonour at all. Go Team Melli, Bring on Portugal,” he said in his tweet, according to a report by Khabar Online.

A review of the latest tweets by Lewis and his wife Elizabeth reveals that their hearts are still with Iran even after leaving the country for a new mission. 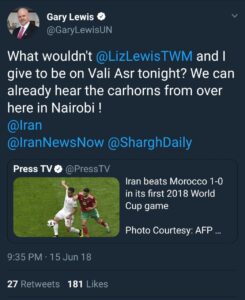 In a tweet after Iran-Morocco World Cup match last Friday, during which Iran managed to beat its rival 1-0, Lewis said in a Persian tweet “My wife Elizabeth and I wished to be at Vali-e Asr Street in Tehran among celebrating Iranians. We can hear the honks even from Nairobi.”

Lewis’ five-year mission in Iran ended in January. In a farewell tweet he wrote, “Iran is always in my heart and I was very much impressed by great Iranian civilization in the past five years living and working there.”

He is now in Kenya’s capital city Nairobi for a new UN mission. Iranians remember him for his efforts in Iran to save Lake Urmia, interest in Iranian culture and good-faith relations with Iranian diplomats including Iran’s Foreign Minister Mohammad Javad Zarif.

Since 2013, Gary Lewis was working in Iran as the UN representative and coordinator.

Lewis was born in Bridgetown in Barbados in 1962 and has been serving at the United Nations offices in Asia, Africa, Europe, the US, and the Middle East for more than 30 years. 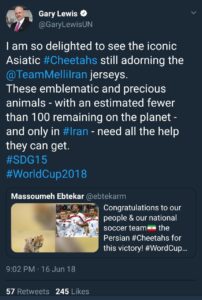 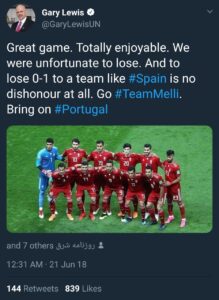