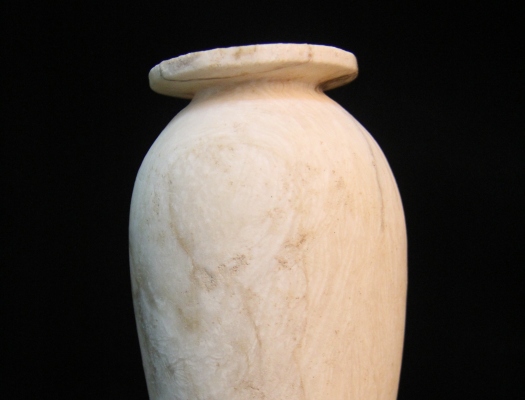 The marble jar was excavated from the grave of a young woman and her child in the Burnt City cemetery.

A distinctive marble jar has been found in excavations carried out by Iranian archeologists in Shahr-e Sukhteh (The Burnt City) in southeastern Iran, it was reported on Monday.

According to the Iranian Cultural Heritage and Tourism Organization, the unique finding was dug out from the grave of a young woman and her child in the cemetery of Shahr-e Sukhteh.

Shahr-e Sukhteh is an archaeological site of a sizable Bronze Age urban settlement associated with the Jiroft culture. It is located in Sistan and Baluchistan Province, in southeastern Iran, on the bank of the Helmand River, near the Zahedan-Zabol road.

In July, 2014 it was placed on the World Heritage List of UNESCO.

Artifacts recovered from the city demonstrate a peculiar incongruity with nearby civilizations of the time and it has been speculated that Shahr-e Sukhteh might ultimately provide concrete evidence of a civilization east of prehistoric Persia that was independent of ancient Mesopotamia.

Covering an area of 151 hectares, Shahr-e Sukhteh was one of the world’s largest cities at the dawn of the urban era. In the western part of the site is a vast graveyard, measuring 25 ha. It contains between 25,000 and 40,000 ancient graves.

The analyses of the findings from the ancient graves have helped create a rich database about the archeological aspects of the city.

The settlement appeared around 3200 BC. The city had four stages of civilization and was burnt down three times before being abandoned in 1800 BC.

According to Seyyed Sajjadi, head of the Iranian archeology team working at the site of the Shahr-e Sukhteh, some 58 new graves and skeletons as well as 262 new objects have been found in the latest excavations carried out in the city.

The official said the examination of the remains has shown that the average age of the individuals at the time of death was between 25-35 for adults, 4-7 for children and 1-3 months for newborns.

Some paleoanthropologists believe that mothers in the Burnt City had social and financial prominence.

The excavations at the Burnt City also suggest that the inhabitants were a race of civilized people involved in farming and craftsmanship.