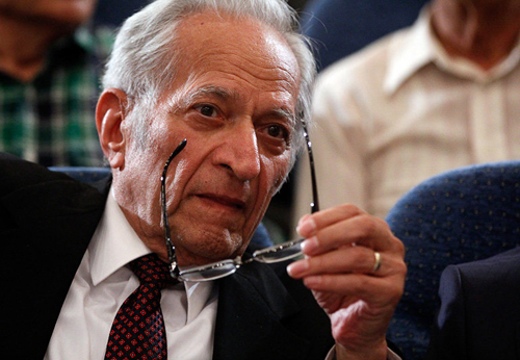 It is for the first time that UNESCO is honoring the efforts of a living Iranian figure in Iran.

The United Nations organization on Friday held a ceremony in Shiraz, southern Iran, to celebrate the sublime status of the Iranian professor.

Addressing the ceremony, Head of the Iranian National Commission for UNESCO Mohammad Reza Saeedabadi referred to Professor Khodadoost as a scholarly physician who owes all his success to his beautiful views towards the Almighty, his inventions as well as his love for people.

Highlighting that the professor contributed immensely to production and growth of knowledge by his effective and influential presence in different universities, he said that it is for the first time that UNESCO is honoring a living Iranian figure.

Professor Ali Asghar Khodadoost was born in 1935 in Shiraz.

After graduation from high school, he started teaching at a primary school there.

In 1954, he began his higher education in Shiraz University’s Faculty of Medial Sciences as a top student.

When he completed his six-year studies with distinction he became an intern in the Eye, Ear, Nose and Throat Department of Shiraz University’s Namazi Hospital till 1962.

In that year he left for the US to complete his specialized studies in the famous John Hopkins University.

He was admitted as the first and only foreign assistant in the Ophthalmology Section of John Hopkins University in 1963 and throughout the next three years of serving as an assistant there, he was praised as the best assistant of the Wilmer Ophthalmology Center.

A large number of Professor Khodadoost’s articles were published in the website of the Pop Medicine and other international scientific periodicals.

In 1968 he got back to Iran and began teaching in Faculty of Ophthalmology of the University of Shiraz as a full professor.

From 1968 to 1980 he traveled back and forth once every six months between the University of Shiraz and the John Hopkins University where in addition to teaching he also pursed his scientific projects.

During the same period he also taught as a guest professor in various countries’ universities, including those of China, Turkey, Syria, Oman, Peru, Ecuador, and Italy.

In 1982 he was appointed as a full professor in the Faculty of Ophthalmology of Italy’s Sicily University and in 1992 he established the Connecticut Ophthalmology Center in Newington where he served as the senior supervisor.

From 1980 onward, the great Iranian ophthalmologist frequently returned to Iran and flew back to US, participating both in hospital treatments of the patients and in academic trainings of young ophthalmologists of the universities of both countries, especially in Tehran and Shiraz.

His fame in the world in addition to publication of several scientific articles and large-scale research projects in various fields is due to the new remedial methods that he has initiated in eye operations.

The eye membrane section of the John Hopkins University is named after professor as Khodadoost Basement Membrane Line.