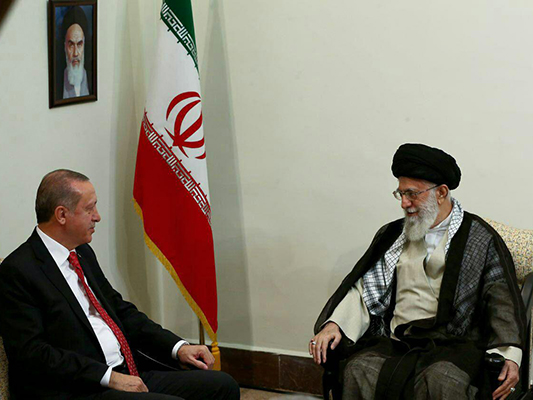 During the meeting, Ayatollah Khamenei underlined the need for increased economic cooperation between Iran and Turkey.

The Leader also described Tehran-Ankara cooperation on major issues of the Islamic world as extremely important and influential.

He emphasized the need to expand economic cooperation between the two countries, adding, “Unfortunately, despite the existence of numerous capacities, the level of economic cooperation in recent years has not made any progress, and increased efforts are needed in this regard.”

Ayatollah Khamenei expressed his gratitude for the cooperation between Iran and Turkey at the Astana talks on Syria, and referred to the improved situation in Syria as a result of such collaboration.

“The issue of Daesh and Takfiris will not end this way (without cooperation); solving this problem requires a long-term and realistic plan.”

The Leader further referred to the referendum in Iraqi Kurdistan as a betrayal to the region and a threat to its future.

Ayatollah Khamenei then pointed out the negative long-term consequences of the referendum for neighbours, emphasizing, “Iran and Turkey should take every possible step in confronting this (referendum); and, the Iraqi government must also seriously decide on it and act.”

“The US and European governments look at this issue from a completely different point of view, compared to that of Iran and Turkey. The United States wants to maintain an everlasting and disruptive agent against Iran and Turkey; therefore, Americans and Europeans, and their positions cannot be trusted in any way.”

Ayatollah Khamenei, addressing the Turkish President, stated, “As you pointed out the recent events primarily benefit the Zionist regime, and secondly benefit the US government.”

“With a long-term and strategic vision toward the recent issues, serious and rapid decisions must be taken, and the issues must be encountered by a single action.”

The two presidents also attended a ceremony where several memoranda of understanding were signed between the two neighbouring states.