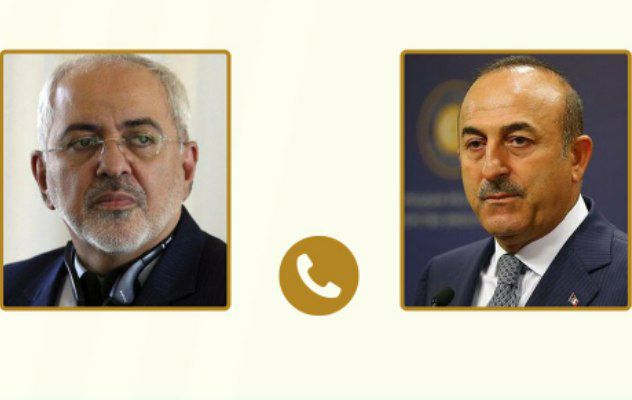 Minister of Foreign Affairs of Turkey Mevlut Cavusoglu has called his Iranian counterpart to give an assurance that Ankara respects the Islamic Republic’s sovereignty and territorial integrity after the Turkish president’s recitation of a poem provoked unease in Iran.

In the Saturday telephone conversation with Foreign Minister Mohammad Javad Zarif, Cavusoglu underlined the close and friendly relations between Turkey and Iran, and highlighted Ankara’s definite policy of good neighbourliness.

The senior Turkish diplomat explained that President Erdogan had not been aware of the sensitivities surrounding the lines he recited in Baku and associated the poem only with Lachin and Karabakh, which is why he recited it in the recent event in Azerbaijan Republic.

For his part, Foreign Minister Zarif underscored the significance of friendly relations between the two neighbours that signify mutual respect.

Highlighting the cordial ties between the president of Turkey and the high-ranking officials of the Islamic Republic of Iran, Foreign Minister Zarif expressed hope for the expansion of bilateral relations on the basis of mutual trust.

The phone call from the Turkish foreign minister came after President Erdogan provoked controversy when he recited lines from a folk song that promises a reunion of Azeri-speaking people from Iran and Azerbaijan Republic, who are now separated by the Aras border river.

The Turkish leader made the comments at a speech to the “Victory Parade” in Baku on Thursday.