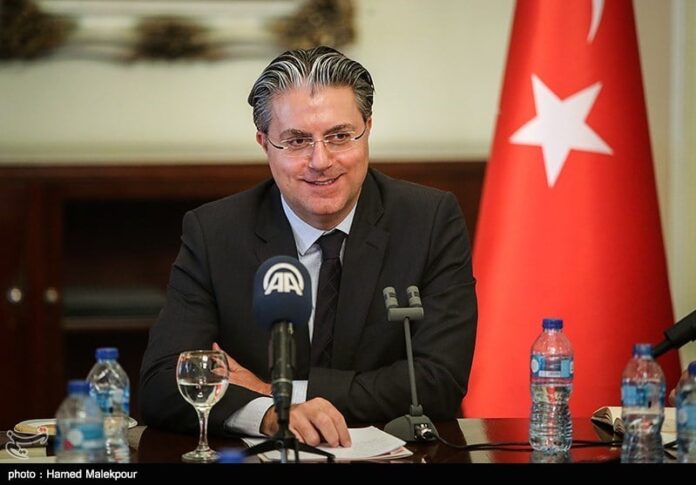 Turkey’s ambassador to Tehran says his country regards the United States’ unilateral sanctions against Iran as illegitimate and fruitless and will continue its cooperation with Tehran.

Reza Hakan Tekin told reporters on Sunday that Ankara has not yet received any message or demand from the US as to how Turkey is expected to behave regarding Washington’s sanctions on Iran. However, he added, a US delegation is scheduled to visit Turkey to express their requests.

Speaking in a press conference in Tehran, the top diplomat underlined that the United States has clearly announced what approach it is going to adopt vis-à-vis Iran. He said the White House intends to put all-out pressure on Iran in the economic domain.

Nevertheless, said the ambassador, US officials make contradictory remarks as well. For instance, he said, American authorities once said they intended to bring Iran’s oil exports to zero, but stated a few days later that there could be exceptions. He underlined that Turkey’s stance on US sanctions is crystal clear as Ankara regards the bans as illegal and fruitless.

Tekin said Turkey is standing by Iranian people in the face of sanctions, and stressed that Ankara and Tehran have extensive economic cooperation. Moreover, he said, Turkey and Iran are working together and have many common interests in political, defense and security arenas.

Tekin, who was speaking on the second anniversary of the abortive coup in Turkey, touched upon the mass arrests made in order to purge the Turkish society of elements working for opposition figure Fethullah Gülen. He said the arrests during which journalists are also apprehended are sometimes referred to as “crackdown” on people, but, as he added, the move is aimed at dealing with terrorists.

Tekin said Turkey once again thanks Iran for its unflinching support for Ankara in the very early hours after the failed coup. The top diplomat said Tehran never allowed “Gullen’s terrorist organization” to establish a base in Iran.

Elsewhere in his remarks, the Turkish ambassador touched upon Ankara’s strategy regarding Syria. He said Turkey was not a party to the talks on the establishment of a de-escalation zone in Syria and, hence, has no precise information in that regard and does not know whether or not the US and Russia have reached agreement on that. However, he noted, Turkey believes Idlib is very important. He said there is no military solution to the crisis in Syria, and he conflict should be resolved politically.

The top diplomat referred to the operations conducted by Turkish forces in al-Bab and Afrin in northern Syria against ISIS and PKK militants, saying Turkey has no plans for a permanent presence there.