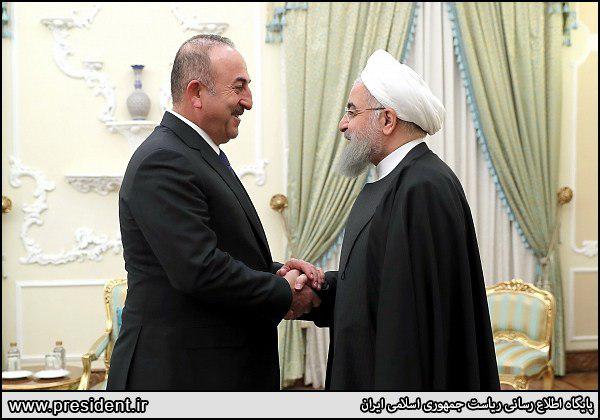 Turkish Foreign Minister Mevlüt Çavuşoğlu has assured Iran’s president that his country’s military operation in northern Syria is a temporary one and Turkey does not have its eye on Syria’s territory.

Speaking in a Weenesday meeting with Iranian President Hassan Rouhani in Tehran, Çavuşoğlu underlined Turkey’s operation in Syria’s Afrin is only aimed at defeating terrorist groups in the region.

“We maintain that regional states should stand up against plots hatched up with the aim of violating their territorial integrity,” he was quoted as saying in a Farsi report by the Iranian president’s official website.

He went on to say that one of the US’ main projects in the region is sowing the seeds of discord between Iran and Turkey, adding the two states should stand firm against the plot and expand their ties to resolve regional problems especially Syria crisis.

For his part, President Rouhani underlined the need for fighting against terror and foiling plots by foreign powers to divide the region.

“Unfortunately, following their failures in Iraq, some powers have turned to Syria with the aim of changing the geography of the region,” he noted.

“If the region is to have peace, terrorism in Syria should be eradicated. To this end, cooperation among Iran, Turkey and Russia can play a key role.”

He referred to the recent Sochi Congress on Syria crisis and described it as an important step to resolve regional problems.

The Iranian president also expressed Iran’s readiness to contribute to efforts to tackle regional problems through expanding its cooperation with Turkey.

Rouhani also referred to the growing economic ties between Iran and Turkey and said Iran is prepared to expand its ties with Turkey in the energy field and welcomes the presence of Turkish investors in oil and gas projects in Iran.