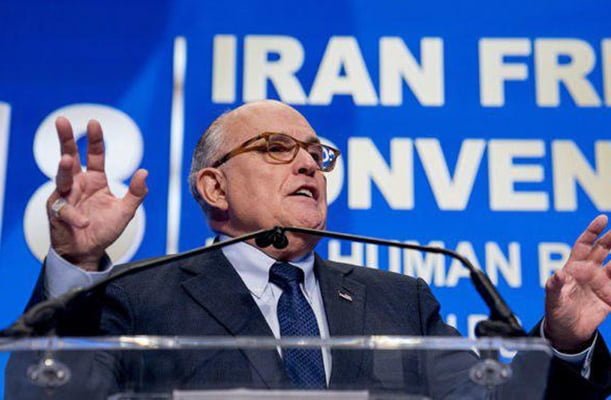 US President Donald Trump’s lawyer Rudy Giuliani, in an address to a rally staged by the Mojahedin Khalq Organization (MKO) terrorist group, admitted recent protests in Iran had been orchestrated from outside.

It was unclear whether “our people” was intended to mean the US or the MKO, Guardian reported.

A number of Iranian cities were a scene of protests over economic hardships early January. The protests were peaceful in the beginning, but later took a violent turn and led to clashes between some protestors and police forces.

Also last week, Tehran’s grand bazaar saw several days of protests in the wake of a dramatic decline in the value of rial that has depressed markets.

Speaking in the meeting held in Paris on Saturday, Giuliani, the former New York mayor, called for a regime change in Iran.

“We are now realistically being able to see an end to the regime in Iran,” Giuliani told a crowd of about 4,000, many of them refugees and young eastern Europeans who had been bussed in to attend the rally in return for a weekend trip to Paris.

In his address to the rally of MKO, who for decades was listed as a terrorist organization in the US and Europe and is widely seen as a personality cult, Giuliani said the fall of the government in Tehran would be brought about by economic isolation.

“This government is about to collapse, and this is the time to turn on the pressure,” Giuliani said, according to Bloomberg.

“Thank God my president turned his back on that very dangerous nuclear deal with Iran. We are not going to do business with the world’s top sponsor of terrorism,” he claimed.

In May, Trump abrogated the 2015 international nuclear deal with Iran and ordered a campaign of intense economic pressure, threatening sanctions against any foreign company doing business with Iran and calling for an end to trade in Iranian oil by November.

“When the greatest economic power stops doing business with you, then you collapse … and the sanctions will become greater, greater and greater,” Reuters quoted Giuliani as saying.

“Freedom is right around the corner … Next year I want to have this convention in Tehran!” Giuliani shouted.

Giuliani was one of 33 senior US officials and military brass at the year’s conference on Saturday. Newt Gingrich, a former House speaker and a close Trump ally, Bill Richardson, former US ambassador to the United Nations, US energy secretary and Democratic governor of New Mexico, were also in attendance.

US Democrat leader Nancy Pelosi also sent a message to the conference, expressing hope for establishment of what she called a democracy in Iran.

It was unclear if the speakers at the Saturday conference were paid. The MKO have been known for paying very high fees, particularly to such figures as Giuliani and Trump’s national security advisor John Bolton, among others.