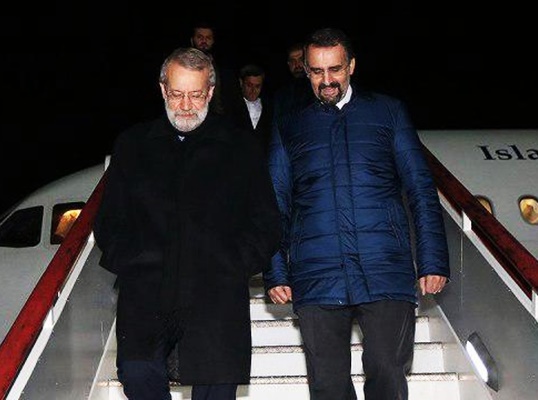 Iranian parliament speaker has blasted US President Donald Trump’s anti-Iran rhetoric in recent days, saying such remarks tarnish the international images of the US.

Before departing for Saint Petersburg on Thursday to take part in the 137th Inter-Parliamentary Union Assembly, Larijani touched on the US recent stance towards the Joint Comprehensive Plan of Action (JCPOA) and Iran’s possible reaction to the stance. “I don’t think the international community takes the US stance towards JCPOA seriously,” he was quoted as saying by ICANA.

The parliament speaker went on saying “as far as I know the European states as well as Russia and China have a similar stance with Iran towards JCPOA.”

He stressed the unconsidered and emotional decision by Trump’s administration will create problems for the US and other states.

Larijani said that during a recent meeting between Iran and world powers in New York, no delegation backed Washington’s stance towards JCPOA and “all unanimously condemned the US aggressive approach.”

The Iranian top parliamentarian also said all states view the JCPOA as an international treaty which has been passed by the United Nation Security Council. “This means that the JCPOA has become part of a resolution standing beyond the authority of a single state.”

He also referred to the latest statements by the US Secretary of State, Rex Tillerson, and said Tillerson claimed while Iranian were signing the JCPOA, they had to take this fact into account that the deal may change with the change of government in the US.

“If the American officials really view international treaties in this way, how can other states trust them and sit for talks? Such views reveal how childish is the mindset the US officials have when it comes to international issues.”

Larijani also added US stances towards the JCPOA are not significant. “We have had long discussions on the JCPOA in the parliament on Iran’s due response to the nuclear issue.”

The spokesperson of Iran’s parliament went on saying the Iranian nation is not concerned about US stance towards the JCPOA “because all states across the world have come to realize the stance of Iran and back us.”

The Iranian official added that Iran has made significant progress in the nuclear field and added Iran will continue its progress with a higher speed building on the international support behind the country.

“Iranian officials are not concerned about the future of Iran’s nuclear program because we have adopted various measures to cope with the US stances. There is no reason to behave emotionally and naively,” he concluded.

He went on saying such statements considerably tarnish the US international image and added, “As you saw, most of the European and other states have vehemently slammed Trump for his anti-Iran rhetoric.”

The Iranian official also added Iran is closely monitoring the issue. “We are seeking patiently to find out the real motives behind Trump’s accusations.”

Larijani stressed that Iran rejects “ignorant and emotional” stances of the US officials and will do its best not to fall into their trap.

“We are closely monitoring the issue and will decide patiently after considering all aspects. We are also mindful of the media hype around the issue. Anyhow, we don’t take such statements seriously and will give a proper response to them,” he added.