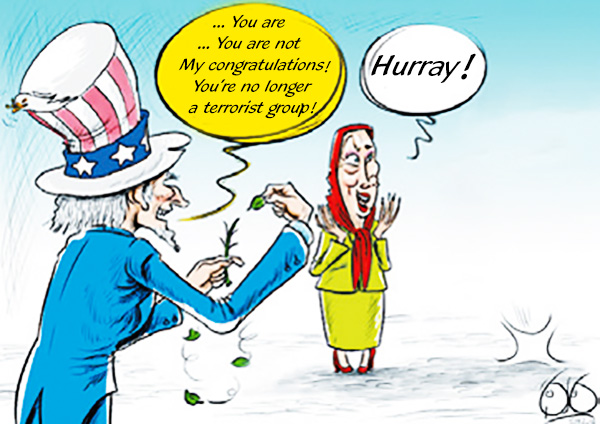 With a number of close friends and advisors who advocate the MKO terrorist organization, US President Donald Trump seems to be using the anti-Iran terrorists as a means of putting the Islamic Republic under pressure.

Members of the MKO (Mojahedin-e Khalgh Organization) terrorist group were initially supposed to fight the despotic regime of the Shah of Iran, but later on deviated from their path and reached a point after the 1979 Revolution where they openly stood against the Islamic Republic of Iran with their so-called eclectic ideology.

According to a Farsi report by Javan newspaper, killing thousands of ordinary people was just a small part of the crimes committed by MKO terrorists against Iranians. Their treason was capped by cooperation with former Iraqi dictator Saddam Hussein’s regime and a direct attack on Iranian soil in an operation codenamed “The Eternal Light,” which ended in an ignominious defeat.

Ever since, the MKO terrorist group has been spiraling down the vortex of annihilation. After its base at Camp Ashraf in Iraq was dismantled by Iraqi people, members of the terror group were dislodged and are now wandering around the world.

When the MKO was still on the West’s blacklist, conferences were held in different countries, especially France, on a regular basis in support of the terrorist group. The interesting point was that the MKO being blacklisted was not because of its crimes, but because its members had killed several American military officials during the former Iranian regime. Later on, the terror group, time and again, expressed contrition for murdering the Americans.

Since the very beginning, rumours had been flying around that a powerful financial network was behind the gatherings, so much so that some of the speakers at the events were prosecuted by Western authorities on charge of money laundering.

In 2012, the US Treasury launched a probe into whether or not the money paid by the MKO to a large number of American politicians for delivering speeches at its conferences was legal.

As the MKO was still on the list of terrorist organizations at the time, it was illegal under the US law to receive money from the group. American politician Rudy Giuliani delivered a few speeches between 2011 and 2012, calling for the MKO to be taken off the State Department’s list of terrorist organizations. He also made a speech in Paris in 2013 while being accompanied by Maryam Rajavi, the MKO kingpin.

The State Department’s investigation showed that then Pennsylvania Governor Ed Rendell had been summoned to court for involvement in activities in support of the MKO. According to The Washington Post, Rendell had received $20,000 for attending a demonstration by MKO members. There were different speculations on where the bankroll came from, but it seemed the Israeli regime and Saudi Arabia were the top sponsors.

The significance of the financial support came to light when it was revealed during the course of an investigation into the assassination of Iranian nuclear scientists that Tel Aviv had used some MKO elements in Iran to help carry out the assassinations. Now that Donald Trump has been elected to the White House, fresh attempts are underway to bring the terrorist group to the fore once again.

The fact that his election came about amid the popularity of some MKO supporters with the current US administration has fuelled speculation that efforts will be made in the near future to use the terrorist group as a lever to exert pressure on Iran.

Rudy Giuliani and Newt Gingrich, who have been taking part in MKO gatherings as supporters of the group for years, are considered as very close to Trump. In his speeches, Giuliani has described the MKO as the real representative of the Iranian nation. Gingrich also attended an MKO conference in Paris recently.

The interesting point was that a rightist American analyst, who was also attending the event, released a photo of Gingrich, describing him as a suitable pick for Vice President or Secretary of State.

The analyst said Gingrich had understood the threat posed by Iran. Probably the latest move in this regard was a letter addressing Trump published by a number of people, including members of the so-called National Council of Resistance of Iran (NCRI). The letter reads: We hope the US will, under your leadership, help Iranian people retake their country from the current regime which has been in power for four decades now.

The NCRI was founded by MKO ringleader Masoud Rajavi in 1981.

Necessity of sending a strong message to MKO advocates

It seems far-fetched that the MKO could carry out just any threat against the Islamic Republic of Iran. Even Western analysts believe the terrorist group has no power base among the Iranian people nor does it have any local support inside the country. A comprehensive 2009 survey conducted by the Brookings Institution on ways of toppling the Iranian establishment also bears testimony to that.

Still, the West is not unlikely to set the stage for the MKO to conduct hit-and-run operations inside Iran under the pretext of political freedom. Past experience shows MKO members are, under certain circumstances, capable of carrying out some hit-and-run acts in a security context.

With that in mind and given the possibility that certain officials in the Trump administration might take a biased stance, it seems the Iranian government will, through active diplomacy, make the true colours of the MKO terrorist group known to people across the globe.