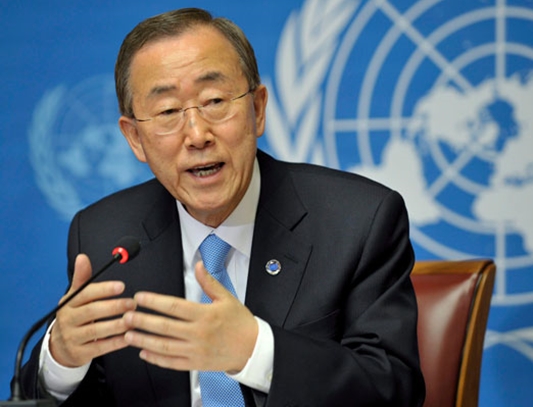 Secretary General of the United Nations Ban Ki-moon says the remarks made by the US president-elect Donald Trump during his presidential campaign against Iran nuclear deal were political rhetoric and he will remain committed to the Joint Comprehensive Plan of Action.

In an interview with Entekhab, as covered by IFP, Ban was asked whether the US President-elect Donald Trump is able to scrap the nuclear deal with Iran which was passed in the United Nations Security Council.

“Of course this deal may not be a perfect agreement, but we are not living in a perfect world. If there is anything that may not be satisfactory to the newly-elected president, he should discuss it with the parties concerned,” he went on to say.

He stressed that what matters is the implementation of the agreement in a faithful manner.

“Whatever he [Trump] might have said [what he said against the nuclear deal] as political rhetoric and during presidential campaign, I’m sure once he becomes the president in January, he will be committed to the agreement,” Ban reassured.

In response to a question regarding the remarks made by Trump’s Foreign Policy adviser against Iran deal, Ban noted, “I’m not in a position to talk about this, but as a matter of principle, the agreement should be supported.”

“Since UN has been established, we have seen many changes in the US administration from Democrat party to Republicans. But all of them have honoured these agreements,” he added.

During the election campaign, Trump had threatened that he would “tear up” the JCPOA or try to renegotiate its terms if elected president.

“Ripping up is maybe a too strong of word, he’s going to take that agreement, it’s been done before in international context, and then review it,”

“He will take the agreement, review it, send it to Congress, demand from the Iranians to restore few issues or change few issues, and there will be a discussion,” Phares added.