Trump Will Change His Mind If He Visits Iran: US Wrestler

Jordan Burroughs, the well-known American freestyle wrestler, says he is “confident that if Trump ever visited Iran, he’d learn a lot about the people and come back to the US with a newfound appreciation for the Persians.”

In response to Donald Trump’s hastily slapped-together executive order last month that blocked entry for citizens from seven predominantly Muslim countries, including Iran, the Iranian government barred visa entry for all US citizens. The move had a direct effect on the wrestling World Cup, an international competition that was set to take place in the country, where wrestling is pretty much the national sport.

The United States, of course, has some of the world’s best wrestlers; a wrestling World Cup in Iran without the Americans would be kind of like an NBA finals in the ’80s without the Celtics or Lakers. But after Iranian officials witnessed Americans protesting the president’s executive order, and after the US judicial system struck the ban down, officials reconsidered and eventually granted visas to Team USA. Maybe Iran was inspired by what it saw, or maybe it just wanted to see the world’s best wrestler compete: New Jersey native Jordan Burroughs.

In Iran, Burroughs received a superstar’s welcome, and the 28-year-old was swarmed by fans seeking selfies and autographs. GQ spoke with Burroughs this week about his experience there, what he hopes Americans can learn from his trip, and if he would ever go back to a country many Americans see as a sworn enemy of the state.

GQ: Congrats on a hell of a performance in this past World Cup. How long were you in Iran, and when did you get back?

Thank you, I appreciate it. We were in Iran for a total of eight days, and I got back home to Lincoln, Nebraska, on Sunday night.

Iran ended up winning this year’s wrestling World Cup. They consistently have some of the best wrestlers on the planet. What makes them so good?

It’s interesting, because on a personal level, after seven years on the international stage, I’ve never lost to an Iranian wrestler. But don’t get me wrong: As a team, they are always the best. This was my fifth World Cup, and in each of those competitions, we were beat by the Iranians. It just shows how high of a level those guys are consistently wrestling. Above all else, they are extremely athletic, disciplined, and know how to maintain great positioning throughout a match.

Do you think this type of dominance must have something to do with Iran’s cultural pride?

Absolutely, without a doubt. Other than the US, they’re the only other country that I’ve felt their love for sports is interwoven with their national identity. For Americans, of course, it’s football, basketball, and baseball. We live for it. In many ways, it sums up who we are. In Iran, it’s all about wrestling. The patriotism toward their country comes out in the way they wrestle, so it makes sense why they’re the best.

How difficult was it for you, as an American, to visit Iran after decades of hostile relations? And, most recently, President Trump’s travel ban?

I don’t describe myself as a nationalist, but I do love my country. What I tried to focus on, and what I wanted the Iranian people to understand, is that, listen, America is a democracy. And what that means is we vote for our public officials, and sometimes they don’t win. That means I can still love my country, while wholeheartedly being against certain policies. Donald Trump and I have very different views on Iranians. I am confident that if he ever visited the country, he’d learn a lot about the people and come back to the States with a newfound appreciation for the Persians.

That’s a bold statement. Do you fear for any repercussions it may produce here at home?

I’ve been to Iran twice now, and I can honestly say they are some of the kindest, most hospitable people in the world. It’s such an old culture, and I feel like I’m just starting to learn more about it. So, to answer your question, I’m extremely confident in making that statement and feel comfortable with whatever potential backlash may come with it. 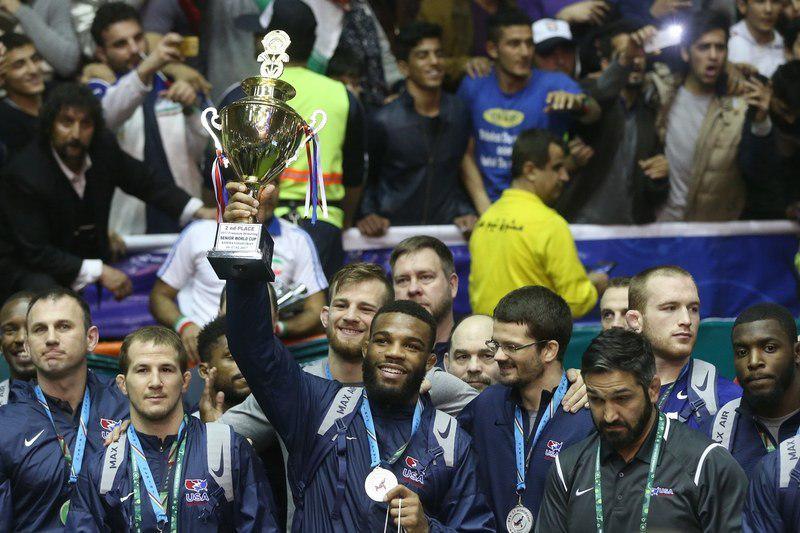 You are considered the best 74 kg wrestler on the planet in a country that’s obsessed with the sport. Did you feel like a celebrity while you were there?

Honestly, it was insane. It seemed like the entire nation was tuned in to the tournament. Their version of ESPN was talking about the event all day long, streaming throughout millions of homes. There were fans lining the airport when we landed, and fans bidding us farewell after the competition was done. I’ve never gotten that type of reception here in the US in the stadium during the tournament, it was something else. They were cheering our names. It’s crazy, right? Here we were in the middle of Iran, and it felt like home.

Are you friends with anyone on the Iranian team?

I’ve become close with Masoud Esmaeilpour and consider him a friend. We send each other messages from time to time on Instagram, checking in to see how the other is doing. Whenever I see him, he’s always a gentleman, giving me tips about my next opponent. There is a tremendous amount of respect in our friendship.

What would you say to those Americans out there who simply don’t trust Iranians, and who believe the Muslim travel ban is smart policy?

I’d say that the way the Iranian people are portrayed in the media, and in movies, is simply false. It’s not representative of who they are as individuals. And that level of awareness is not possible unless you travel there and experience it for yourself. If you do that, if you see for yourself what it means to be Iranian, I promise you your mind will be changed.

Did you run into any issues at any point while you were there?

No, quite the opposite. At times, the love and support we received was overwhelming. We’d be preparing for a match, and the Iranians would have already formed lines of people waiting to get their picture with us, asking for our autographs. Even after the World Cup was over, there were ordinary Iranian citizens sending me and my family gifts such as traditional Kurdish clothing, a book of Persian poetry, dolls for my young children, saffron, an Iranian toffee called sohan.

If I said there was a flight waiting for you to head back to Iran right now, what would you say?

[laughs] I’d say I’m already out the front door on my way to the airport.