‘Trump Needs to Order Coffins, Diapers for US Forces in Western Asia’ 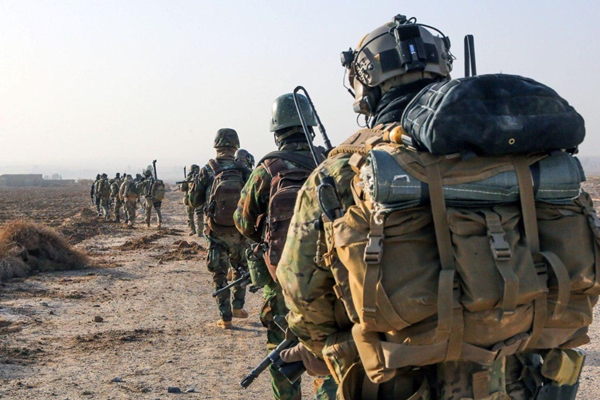 A leading conservative paper in Iran has warned the US against the consequences of its latest decision to designate Iran’s Islamic Revolution Guards Corps (IRGC) as a terrorist organization, saying the Trump administration should now think of ordering coffins for its soliders.

In an op-ed published by Kayhan newspaper, Mohammad Sarrafi writes that the US decision about the IRGC is more like a hasty move deeply rooted in the US outrage and desperateness in the region.

American officials believe that every armed entity that resists the US’ bullying policies in the region, instead of kneeling down and bowing to them, is a terrorist entity, the article said, referring to Lebanon’s Hezbollah Movement, Palestinian resistance group of Hamas, Yemen’s Ansarullah, Iraq’s Popular Mobilization Units and Iran’s IRGC as examples of such entities.

“They have already received lots of slaps in the face by the IRGC. The American officials had lots of bizarre dreams for the Middle East. They had a special plan to create a new Middle East. The new region was born but not in the shape they wanted. The new Middle East has been created in a new format with a new nature completely against the plan they had in mind: The new region is based on a main pillar: Resistance,” it added.

US Secretary of State Mike Pompeo said Washington has a direct message for the Commander of the IRGC Quds Force, Major General Qassem Soleimani, adding, “America is determined each time we find an organization, institution or an individual that has taken the lives of individuals, it is our responsibility to reduce that risk.”

The main question, the op-ed said, is that which measure the US is determined to adopt and why the US top diplomat singled out the Iranian top commander, Major General Soleimani in his speech?

According to Sarrafi, the answer to the mentioned questions should be found in the remarks by the retired US General Stanley A. McChrystal, who led the US special operations in Iraq from 2003 to 2008, about Major General Soleimani.

In an article in Foreign Policy last year, the general put his focus on Soleimani saying, “His brilliance, effectiveness, and commitment to his country have been revered by his allies and denounced by his critics in equal measure. What all seem to agree on, however, is that the humble leader’s steady hand has helped guide Iranian foreign policy for decades—and there is no denying his successes on the battlefield.”

Now, Kayhan says: where is the man who has disturbed the American officials’ dreams?

The answer is that he along with tens of other top commanders of Iran’s army and the IRGC have rushed to the flood-hit areas of Iran to contribute to collective efforts to cope with the floods which have hit the country over the past weeks.

According to the newspaper, the White House’s stupid decision has another side: The costs which will be inflicted on the US and particularly on its military forces in the region.

“As Iranian officials have rightly declared, designating American forces deployed in the Middle East as terrorist forces is the logical response of the Islamic Republic of Iran to the US’ nasty decision.”

In response to Washington’s decision to put Iran’s Islamic Revolution Guards Corps on the terrorist list, the Supreme National Security Council (SNSC) of Iran declared the US a “state sponsor of terrorism” while calling the US CENTCOM a terrorist group as well.

But, the move by the SNSC doesn’t relieve the burden of the parliament’s responsibility to immediately enlist the US army and its affiliated groups and firms like Blackwater as terrorist entities, the op-ed said.

According to Sarrafi, the parliament’s move will have severe repercussions for the US army. “Trump has practically endangered the lives of American forces in the region,” he added.

Sarrafi said it seems Trump has apparently forgotten that just some months ago, in what a humiliating situation he visited Iraq.

“The American officials sit idly in the White House, signing stupid documents which endanger the lives of thousands of poor forces in the region. Within the next week, the US Congress is set to declare its stance towards Trump’s decision. If the Congress approves the stupid decision, Trump needs to order thousands of diapers and coffins for American forces stationed in Western Asia,” the op-ed concluded.