A tourism official invited people from across the world to choose Iran as the destination for their Christmas vacation, in a bid to lure tourists who worth a lot to the country’s economy amid the tightening of US sanctions.

Ali Asghar Moonesan, the head of Iran’s Cultural Heritage, Handicrafts and Tourism Organization, said in a tweet on Saturday he assures people around the world they won’t forget the great memories of their Iran trip.

“[I] invite you [to] travel to Iran, the country of love and peace in your holidays. [I] ensure that [You] will not forget great memories of this journey,” he tweeted.

Millions of people across the world take overseas trips during the Christmas and New Year period, bringing a considerable boost to the tourism industry of hot destinations. 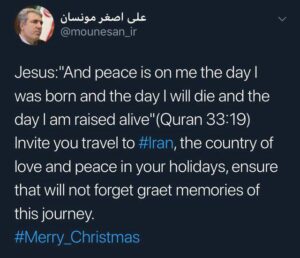 Iranian tourism officials expect a rise of overseas visitors in the coming months, as a plunge in the national currency’s value has made it extremely cheap for foreigners to visit Iran.

In October, Moonesan announced the number of tourists who visited Iran in the first six months of the current Iranian year (started March 21) rose by 51 percent compared to the same period in the past year.

Moreover, Iran has in recent months made efforts to ease the process of issuing visas to attract more foreign tourists.

Iran is home to many historical landmarks and enjoys a rich culture, but its tourism sector remains relatively underdeveloped.

Officials hope tourism could worth a lot to the Iranian economy, creating jobs and boosting economic growth in a country targeted by US sanctions.