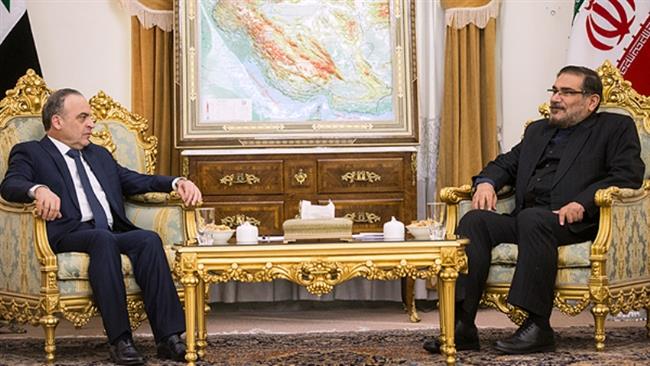 A senior Iranian official says the Islamic Republic supports political initiatives on Syria, which seek to address the real demands of the Syrian people and preserve the war-stricken country’s territorial integrity and independence.

In a meeting in Tehran on Tuesday, Secretary of Iran’s Supreme National Security Council (SNSC) Ali Shamkhani and Syrian Prime Minister Imad Khamis discussed the latest developments in the Middle East, particularly in Syria, in addition to politico-economic cooperation between the two sides.

“The continuation of all-out efforts to liberate areas under the control of terrorists in order to restore security and peace to Syria and the simultaneous pursuit of Syrian-Syrian talks in order to achieve national unity will guarantee successful management of the existing crisis in the country,” Shamkhani said.

He added that enemies of Syria must not be allowed to take advantage of the current ceasefire and political negotiations as a tactic to revive, rearm and regroup terrorist groups.

The Iranian official also stressed the importance of remaining vigilant in the face of plots that seek to undermine cooperation among Iran, Syria and Russia in the fight against terrorism.

Shamkhani, who acts as Iran’s senior political, security and defense coordinator with Russia and Syria, said playing a dynamic and influential role in political issues requires constant cooperation among Tehran, Moscow and Damascus in all decision-making and executive processes.

The SNSC secretary further urged a relentless campaign against Takfiri terrorism, saying, “Unfortunately, Western countries and the US, instead of fighting terrorist elements who are threatening their own national security as well, are imposing sanctions on Syrian officials and the resistance front, and this shows their double-standard approach to the issue of terrorism.”

Khamis, for his part, said the Syrian government has always negotiated with unarmed opposition groups that are keen to preserve the country’s unity.

The Syrian premier said sustainable peace and security will be achieved in Syria if certain countries change their policy of supporting terrorists.

Senior Iranian and Syrian officials have recently exchanged visits and views ahead of the planned intra-Syrian peace talks in the Kazakh capital city of Astana.

The Astana negotiations will be held between representatives from the Damascus government and foreign-sponsored opposition groups on January 23.

The negotiations, which exclude the Daesh and Jabhat Fateh al-Sham Takfiri terrorist groups, are mediated by Russia, Turkey, and Iran. The three countries successfully implemented a similar accord in December after militants were defeated in Syria’s northwestern city of Aleppo.

The Astana talks would be held in the wake of a nationwide ceasefire in Syria, which was endorsed by the United Nations Security Council on December 31.

Aleppo, Syria’s second-largest city, was fully liberated in December, less than a month after the Syrian army started to drive foreign-backed militants out of their stronghold in the eastern side of the strategic city.