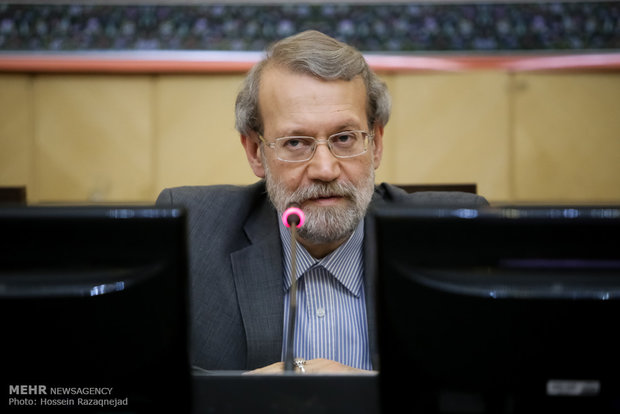 Speaker Ali Larijani has said that Iran has always called for Muslim unity and has demonstrated strong determination to tackle terrorism.

The speaker of the Islamic Consultative Assembly says that positive steps have been taken toward the settlement of disputes which have emerged in nuclear talks between Iran and P5+1.

Ali Larijani made the comment in a meeting with the ambassadors of the Islamic nations in Tehran on Saturday and added that the prospects of the talks are bright. Entekhab.ir on July 5 released a report on his remarks which also featured the ominous phenomenon of terrorism in the region. The following is the translation of part of Larijani’s remarks in the meeting:

Nuclear talks between Iran and P5+1 are rather complex. Iran is trying to help talks proceed successfully. Inside the country, all government branches and officials see eye to eye when it comes to the advancement of the talks.

The Islamic Republic of Iran has always tried to achieve a positive result from the talks. The prospect of nuclear negotiations is positive and great steps have been taken to settle the disputes. Iran is walking down the right path.

Options on the table

Comments by American officials that all options remain on the table in dealing with the Iranian nation have domestic consumption and are simply theatrics [by politicians]. Such behaviors are not constructive. By making ill-considered comments, the Americans have caused huge losses to themselves and to the region. We hope the talks can produce positive results for the region and set the stage for patching up the differences. The positive outcome of the talks will ensure sustainable security in the region.

Today several Islamic countries have been entangled in terrorism and the energy the Islamic community should spend on solving the question of Palestine has instead been used up for solving infightings [in different countries].

Certain powerful countries, which have a hand in the creation of terrorist groups, are trying to foment crises in Syria, Iraq and Yemen. It is regrettable that the Islamic community has been in the grips of such a disaster, which prevents Muslim nations from mobilizing their efforts to counter the Zionist regime.

Plots are at work to disintegrate Muslim nations for which the weakness of Muslims is to blame. History has shown that a divided Muslim community serves the interests of colonial powers. The Islamic Republic of Iran has always highlighted Muslim unity.

The countries that took the wrong direction in dealing with terrorism and supported the terrorists are highly expected to correct their past mistakes.

Iran is seriously determined to take on terrorism and will offer a helping hand to any country which seeks to tackle this ominous phenomenon. The responsibility lies with all nations, Islamic and non-Islamic, to fight terrorism.