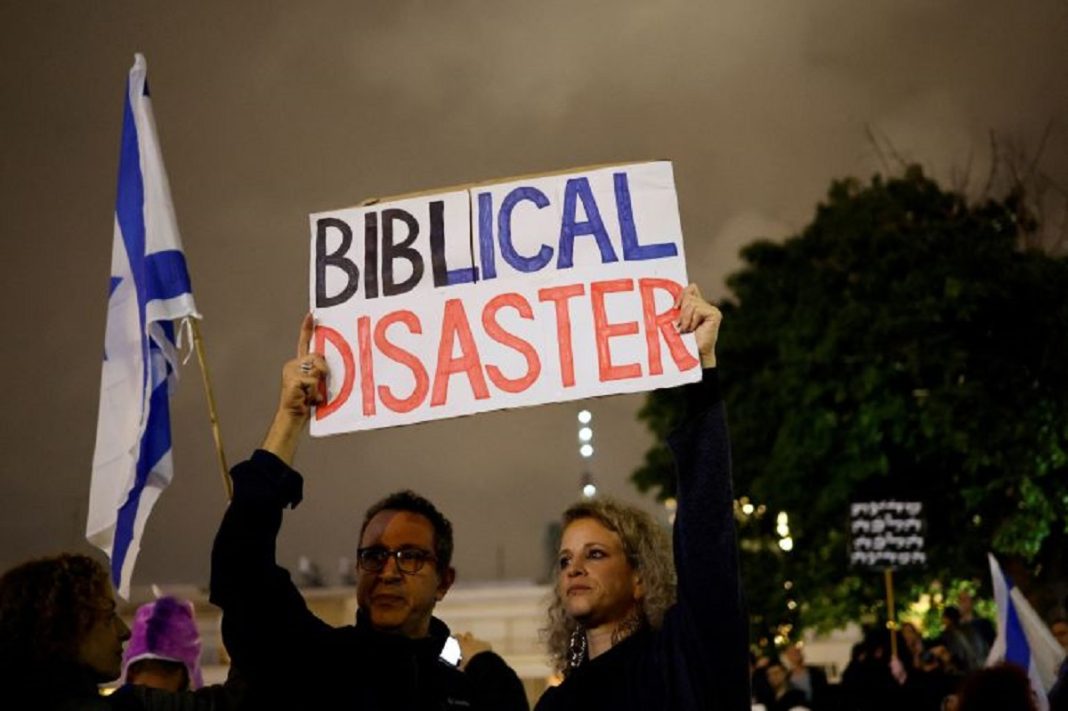 Thousands of Israelis took to streets in Tel Aviv against Israeli Prime minister Benjamin Netanyahu's extremist cabinet, which is predicted to set off a menacing policy trend.

The protest was held on Saturday, with participants holding up a large banner reading “crime minister” – a reference to Netanyahu, who was indicted for receiving bribe, fraud, and breach of trust, during the twilight of his previous mandate as premier in 2019.

Other protesters brandished signs with slogans, including “Together against fascism and apartheid.”

In order to secure the loyalty and partnership of the extremist political parties, Netanyahu has pledged to further their desired agendas. The cabinet has, therefore, been billed as the most far-right one yet in the occupying regime’s history.

The 73-year-old has already released a policy statement on the part of his cabinet, calling expansion of the regime’s illegal settlements across the occupied Palestinian territories a top priority.

Earlier this week, the regime’s new “justice minister” Yariv Levin also announced a reform program, including a “derogation clause” that allows Knesset to override the decisions that are made by the Supreme Court.

The demonstrators denounced the so-called reforms as a vehicle for Netanyahu to circumvent the repercussions of his corruption scandal.

The anti-Netanyahu Black Flag movement has also described Levin’s reforms as a “dangerous coup d’état,” asserting that the measures “will fail.”

In a related development, a human rights advocacy group has issued a report, asserting that the new far-right Israeli cabinet will consolidate occupation, racism and discrimination against Palestinians.

The warning came from the Mossawa Center, which campaigns in favor of the Palestinians who live in the 1948-occupied territories.

It said in the report that the agreements made among the new Israeli cabinet’s parties in order to enable their coalition, promote expansion of the regime’s illegal settlements across the 1967-occupied West Bank as well as Galilee and Negev regions.

The agreements also facilitate the Israeli regime’s enforcement of segregation, allowing creation and maintenance of residential communities based on supposed religious grounds.

The cabinet will also “transfer the supervisory authority over planning and construction laws to the ministry of internal security, which will likely dramatically increase demolition orders against thousands of [Palestinian] houses…”

The ministry is run by far-right Israeli official Itamar Ben-Gvir, who has since the inauguration of the new cabinet created international uproar by storming the al-Aqsa Mosque Compound — Islam’s third-holiest site.

The Palestinian foreign ministry recently denounced Ben-Gvir “as a fascist, who has repeatedly made provocative moves against Palestinians and the sacred al-Aqsa Mosque, and has frequently stoked violence and terror with his inflammatory remarks, hateful threats, and controversial actions.”