Those who have vested interest in sanctions should change their job 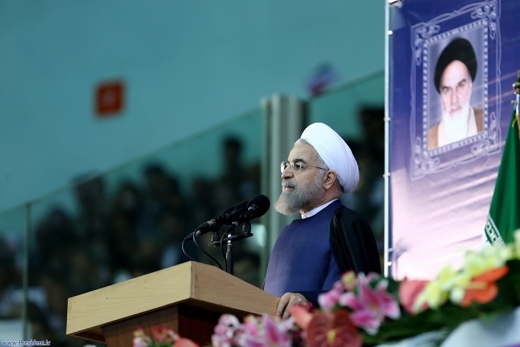 President Rouhani has said through nuclear talks Iran wants to prove to the world that anti-Iran charges are false.

The Iranian president says Iran has got engaged in nuclear talks to show to the world the inauthenticity of allegations against the Islamic Republic and remove the problems the ill-wishers have created for the country.

President Rouhani made the comment at a ceremony held Tuesday to thank those involved in the labor and production sectors. The following is a partial translation of what else the president said as reported by the Fars News Agency:

The president said, “Iran is seeking two points in nuclear talks: First is dismissal of charges. We want to show to the world that ill-wishers told lies to world nations. Iran is after peaceful nuclear technology, not developing a destructive atomic bomb which is religiously banned according to the Supreme Leader’s edict.

“Second, we seek to remove the problems the ill-wishers have thrown our way”.

Rouhani went on to say that a final nuclear deal is within reach in coming months if the other party [to the nuclear talks] demonstrates strong determination.

He said conclusion of a nuclear deal will improve production in Iran, adding those who have a vested interest in [the continuation of] sanctions should think about other ways to line their own pockets.

“With God’s grace and the support of the Supreme Leader and the Iranian nation, Iran will move toward constructive interaction with the world,” he said.

The president further said no country in the world can continue with exerting pressure on and imposing sanctions against Iran over the next months and years.

Rouhani reiterated that the sanctions regime is close to total collapse, saying P5+1 should know that the Iranian nation and government stand by and support each other.

In the year designated [by the Leader] as the year of harmony and solidarity, all Iranians are expected to join hands and help the country’s march toward progress and development, he added.