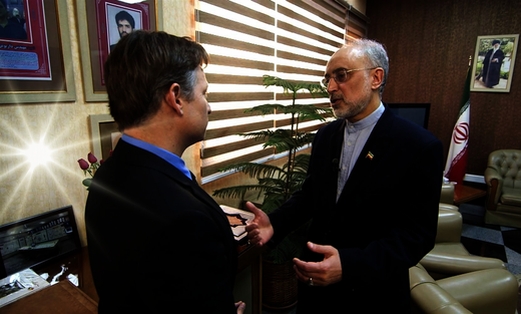 The NBC journalist asked, surprised, “Who will be the sixth martyr?” The head of the Atomic Energy Organization of Iran (AEOI), to the journalist’s astonishment, said, “I hope that it will be me.”

According to the Alalam news agency report, an American NBC journalist paid a visit to Dr. Ali Akbar Salehi while making a documentary about Iran’s nuclear energy and the country’s nuclear agreement with the West.

His attention was immediately drawn by the photos of assassinated nuclear scientists (nuclear martyrs) on the office wall of the AEIO director. Based on how the photos of the four scientists and a martyred driver were laid out, he asked, “What is the empty space for? Do you think there might be a sixth martyr?”

After Salehi responded in the affirmative, the American journalist asked, surprised, “Who will be the sixth martyr?” Salehi replied, to the journalist’s astonishment, “I hope that it will be me.”

Upon hearing this sentence, the smile fell from the journalist’s face. “You hope that it’ll be you?” he asked, stunned. “Yes,” Salehi continued, “Martyrdom is an honour, and all of us are awaiting and seeking it.”