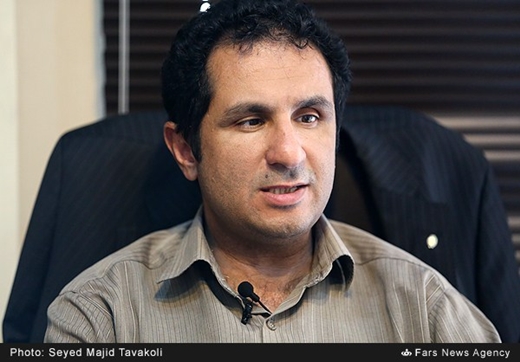 An attorney should get happy after winning a court case only if his victory makes a difference in the legal literature of his country, said Ali Saberi.

He was born blind for which the so-called cousin marriage was to blame. To him, the world was pitch-black, yet he wouldn’t let gloom swallow him up and drive him to despair. Forty-one years on, he has made a name for himself as a seasoned lawyer.

Tebyan.net has published a report on Ali Saberi and how he ended up being a famous lawyer despite his handicap. What appears next is the translation of part of that report:

The highest-paid Iranian lawyer was born in Tehran in 1973. You may wonder how it is possible for a visually-impaired man to climb up the career ladder while a lot of people with perfect eyesight fail to land a job. But, he believes that he is no different from people around him and what he has done is not much of a feat.

On his success in the university entrance exam, Saberi said, “There were a few hardworking students among my relatives who helped me develop a liking for education. I took part in the entrance exam in 1990 and finished second in the nationwide ranking.”

His admission to university paved the way for his acquaintance with Mr. Shahbazi, himself a blind student. Their friendship later helped him get a job in Lavasan Judicial Complex.

In 1998, after Saberi got his Master’s degree, he took the bar exam and passed it with distinction. On his first court case which was a divorce case, he said, “Initially I thought upon setting on foot in the courtroom, stress would engulf me, but unlike what I had imagined, my two-year work experience at the judicial complex helped me represent my client well. Things went without a hitch.”

On other cases he’s handled, Saberi said, “In 2003 the Iranian Hemophilia Society talked with me about a case involving its 2,500 members infected with HIV and hepatitis after the use of tainted blood products provided to them by the Blood Transfusion Organization and the Health Ministry.

I accepted to represent them and with God’s grace, after 23 months, the court ordered the two organizations to pay compensation.”

According to tariffs set by Iran Bar Association, my fee was around $1.7 million, but I was not paid off. Of the money I got, I donated some $200,000 to the Iranian Hemophilia Society.”

It has been four years since the successful attorney married a colleague of his. Saberi has a professional motto which advises anyone who seeks to embark on a career in legal representation to take into account: An attorney should get happy after winning a court case only if his victory makes a difference in the legal literature of his country.