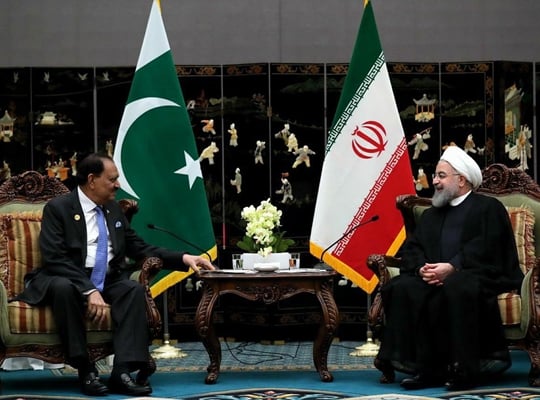 President Hassan Rouhani says Iran welcomes the all-out development of its ties with Pakistan, and the two sides must use the extensive capacities available to further enhance the level of bilateral relations and cooperation, especially in the economic sphere.

In a Saturday meeting with his Pakistani counterpart Mamnoon Hussain on the sidelines of Shanghai Cooperation Organisation in China’s Qingdao, Rouhani emphasised the importance of strengthening banking cooperation for the development of economic relations between the two countries.

He also pointed to Tehran-Islamabad cooperation in the field of energy saying that Iran could be a reliable source for Pakistan’s energy needs.

Regarding the nuclear deal, the Iranian president noted that the Islamic Republic has met its commitments and the US government’s withdrawal is contrary to the rules and conventions of international relations. He said members of the international community must respond to Washington’s move.

Rouhani further underlined that Tehran welcomes mutual defence cooperation as the two countries’ common borders must be kept safe on both sides.

“We want to see a safe and stable Afghanistan and thus the cooperation of Iran, Pakistan and Afghanistan is very important for the security and development of the region,” stressed Rouhani.

For his part, Pakistani President Mamnoon Hussain referred to the cultural and historical commonalities of the two nations of Iran and Pakistan, underlining that Pakistan, as a friendly and neighbourly country, will always stand by Iran, and is determined to develop relations with the Islamic Republic in all fields.

He also hailed Iran’s role as an observer member of the SCO expressing hope that the country will become a permanent member of this organization as soon as possible.

The coastal city of Qingdao is hosting guests from afar for the upcoming 18th Shanghai Cooperation Organisation (SCO) summit.

During this weekend, leaders of the eight SCO member states and four observer states as well as heads of international organisations will gather to exchange views on cooperation and the SCO’s development.