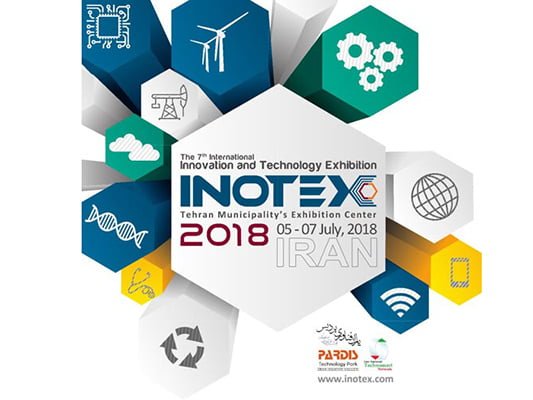 The Iranian capital of Tehran is to host the 7th edition of International Innovation and Technology Exhibition (INOTEX) 2018 from July 5 to 7.

The event is expected to be attended by Iranian and foreign startups and technology companies.

In a press conference, Secretary of the INOTEX 2018, Akbar Qanbarpour, said the first round of INOTEX was held in Tehran in 2012 with more than 50 companies from such fields as ICT, oil and gas, energy, biotechnology and infrastructures in attendance, a report by Mehr News Agency said.

He went on to say that over the past six rounds of the exhibition, more than 750 technology companies from 25 countries attended it and over 130 memorandums of understanding were signed in various areas.

Qanbarpour said companies from Russia, Canada, India, Germany, China, South Korea, Azerbaijan, Kazakhstan, Pakistan, Sweden, Belarus, the UK and many others took part in the past six rounds of the exhibition.

Elaborating on the upcoming exhibition, he added 350 booths have been erected for startups and companies from various fields.

Qanbarpour said the exhibition is set to be held in four sections and added the three-day event is to host a large number of delegations from different countries.

He predicted that about six thousand people will visit the three-day exhibition.

The Secretary of the INOTEX 2018 also said some states like Georgia, Kazakhstan, Oman, Iraq, Turkey, Pakistan, Poland and Indonesia whose technological level is lower than that of Iran will attend the exhibition with the aim of making some international interactions.

He said 350 foreign technology companies from 20 countries will attend INOTEX 2018.

Supported by Iran’s Vice-Presidency for Science and Technology, the event will be hosted by the Pardis Technology Park (PTP) and Iran National Technomart.

He said that Export Development Bank of Iran provides facilities for foreign customers and Iranian companies which want to trade with foreigner parties.

Addressing reporters in the same presser, Head of PTP Innovation Acceleration Centre Ali Hezaveh talked about the startup ecosystem, which will be promoted during INOTEX 2018.

“The exhibition will host 150 startups, which have the main role at the exhibition, incubators, accelerators and investors,” he said.

In coming edition of the exhibition, a special part will be dedicated to the introduction of Iranian startups to visitors. At this section, startups and their functions in everyday life are introduced to the visitors.

Smart environment, energy management in smart cities, smart Internet of Things (IoT) based devices, smart infrastructure and smart healthcare are some of the sections of INOTEX 2018.