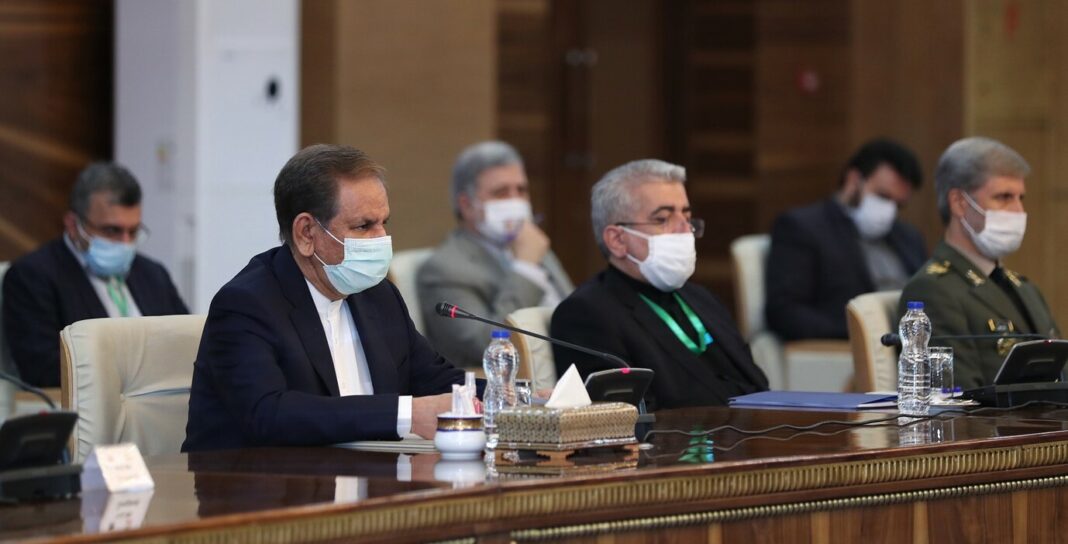 Iranian First Vice-President Es’haq Jahangiri has expressed Tehran’s readiness to sign a comprehensive agreement on economic cooperation with Iraq, describing the deal as a major step in meeting the target for the promotion of bilateral trade.

In remarks at a meeting of high-ranking Iranian and Iraqi delegations, held in Tehran on Tuesday, Jahangiri pointed to a target that the two countries have set to raise the value of annual trade exchanges to $20 billion, saying, “In order to achieve that target, the Joint Economic Commission of Iran and Iraq is prepared to draft the comprehensive document on economic and trade cooperation between the two countries.”

The vice president also stressed the need to support and provide impetus for the Joint Economic Commission and the Iran-Iraq High Joint Commission, saying the activities of those commissions would greatly help settle the problems and remove the trade obstacles.

Hailing the formation of Iraq’s new government in light of interaction and constructive dialogue among various Iraqi political groups, the Iranian vice president said the Islamic Republic has always attached importance to stability and security in Iraq.

Iran would welcome the restoration of Iraq’s role in the region, Jahangiri noted, adding, “Tehran supports the strengthening of Iraq’s regional role and expansion of its interaction with the countries.”

The bulk of problems that have gripped the regional countries are caused by the outsiders, he deplored, calling for concerted efforts to overcome the challenges that have been aggravated by the outbreak of coronavirus and a decline in the oil prices.

The vice president also pointed to the American assassination of top Iranian commander Lt. General Qassem Soleimani, saying Tehran expects Baghdad to seriously pursue the case of martyrdom of the general, who had gone to Iraq as a guest of the Baghdad government.

Highlighting the ample opportunities for cooperation between Iran and Iraq, Jahangiri said, “Fortunately, the cooperation between Tehran and Baghdad has made an acceptable progress in various sectors, as in the oil, gas and electricity (industries), and has been carried out to a great extent, but there are still multiple other grounds for the promotion of bilateral economic relations.”

Strong banking and financial ties are requisite for the enhancement of economic relations, he noted, calling for plans to accelerate the implementation of banking agreements.

He further pointed to a temporary shutdown of border trade following the outbreak of coronavirus, saying the borders have reopened. “It is necessary for the two countries to observe the health protocols strictly, so that the Iranian and Iraqi merchants could work confidently and in safe conditions.”

The vice president then highlighted the active role of the Iranian private companies in the reconstruction of Iraq’s infrastructures and offering technical and engineering services, urging Baghdad to resolve the problems of the Iranian contractors and companies and settle the debts.

Jahangiri finally reaffirmed Iran’s commitment to supporting the Iraqi government and nation in hard times, in the same way that it assisted the Arab country in the fight against ISIS terrorist group.

For his part, Iraqi Prime Minister Mustafa al-Kadhimi, who was chairing the Iraqi delegation, said Baghdad is willing to establish broad relations with Tehran considering their historical, cultural and religious commonalities.

“The common history and values have caused Iran and Iraq to have common interests, and such factors remind us that the two countries should develop major economic partnership,” the Iraqi premier said.

Al-Kadhimi also praised Iran as the first country that rushed to help Iraq in the war against terrorism and Takfiri groups, stressing that the government and nation of Iraq will never forget such Iranian support.

“That’s why Iraq stood by the Islamic Republic of Iran and helped it overcome the economic crises and challenges,” the visiting prime minister added.

He finally pointed to the difficult economic conditions that Iraq is facing, voiced his country’s readiness to hold meetings of the Joint Economic Commission and the High Joint Commission, and added, “I hope we would be able to overcome all problems in cooperation with each other.”

Heading a ranking political and economic delegation, Iraqi Prime Minister Kadhimi arrived in Tehran on Tuesday before travelling to Saudi Arabia and the US.