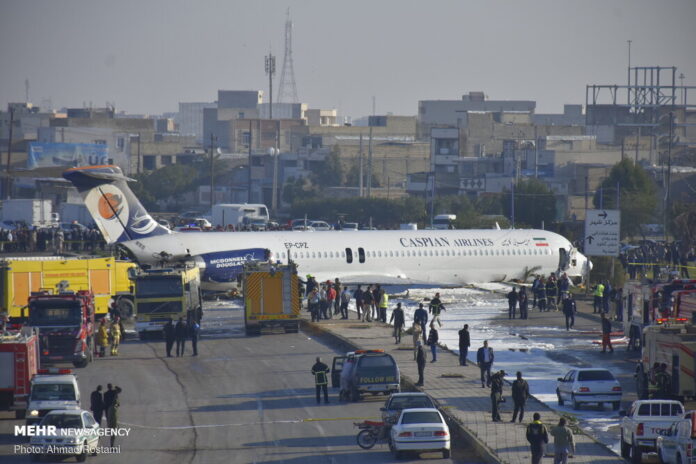 The Tehran-Mahshahr Flight 6936, a Boeing MD plane operated by Caspian Airline, slid off the runway and stopped in the middle of a road in Mahshahr on Monday, with no casualties reported.

Mahshahr’s Governor Mohsen Beyranvand said “the Tehran-Mahshahr flight failed to control itself on Mahshahr Airport’s runway due to a technical failure, and skidded off the runway, crossed the road, and stopped on Mahshahr’s entrance street, next to the Nastaran Park.”

“The incident caused no casualties and all the passengers are safe,” he added.

“The officials involved are trying to dump the fuel from the airliner so that they can return it to the runway as soon as possible,” he added.

A passenger was quoted by ISNA as saying that “the airplane took off at 06:42 from Tehran, the passengers were received well, and everything was good. [But] as we were nearing the Mahshahr Airport I told the passenger sitting next to me that the plane is not in normal condition for landing. Then, the airplane braked terribly and slid off the runway. Because of the dirt from last night’s rain the plane crossed the fence and after travelling a 100-metre distance stopped in the middle of the road, with the emergency doors opening.”

The passenger went on to say “flight attendants helped passengers leave the plane quickly using over-wing exits, as the plane was leaking fuel. The passengers were lucky that the highway in which the plane stopped was empty, given that it is the passway for the buses carrying the staff of Mahshahr Petrochemical Complex and Imam Khomeini Port.”

The incident was the third in three days, after the Tehran-Istanbul flight had an emergency landing in Tehran on Saturday and the Gorgan-Tehran flight stopped before take-off, both due to what officials say was engine shake.

Renewing the air fleet has been a serious concern for Iran in recent years due to the sanctions imposed by the US targeting the country’s air industry.