Talks to reach a deal the only way ahead for Americans: Iranian official 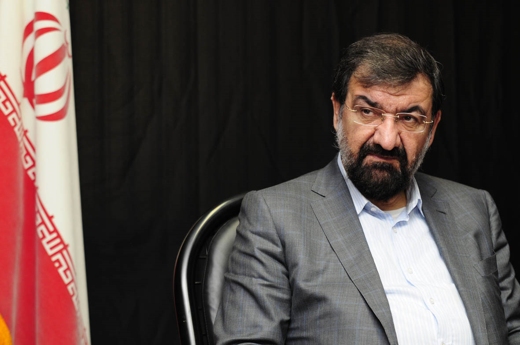 By raising the question of missiles in the talks, the Americans committed a strategic blunder, Rezaei said.

In dealing with Iran, there are no options for the Americans but hold talks and reach an agreement, Secretary of the Expediency Council Mohsen Rezaei told a TV talk show on Saturday, citing American inability to mount a military attack on Iran or turn up the sanctions heat.

Rezaei, a onetime commander of the Islamic Revolution Guard Corps, likened the Americans in the home stretch of the talks to a weightlifter who’s unable to bear the weight and said, “With that in mind, an extension of the talks would be normal and indicative of a lack of genuine authority in the US negotiating team.”

The following is the translation of an excerpt of Rezaei’s comments as reported by entekhab.ir on July 12:

The Americans have shifted the focus from nuclear issue to the question of missiles. They argue that Iran should not possess missiles with a range of more than 300 km. This is meant to prevent Iran from defending itself if the Zionist regime decided to attack Iran one day.

In other words, the Americans harbor ill intentions against Iran; they seek to impose a war on Iran in the future. To that end, they are trying to deny us the means to fight back.

American efforts to divert the talks from what was originally designed to be covered have put the negotiating process in danger. The important thing at this juncture is Obama’s managerial skill. This case seems to be too difficult for Obama to handle.

After the sedition of 2009 [the riots two presidential candidates sparked by disputing the results of the presidential elections] the Americans wrongfully thought that Iran was weakened and that time was right for imposition of additional sanctions. Later when the Iranians put up stiff resistance, they learned about their mistakes.

Although President Obama tried to lift the very sanctions he had signed into law, thanks to local and Zionist pressures he was unable to remain on top of the situation. The same inability forced John Kerry to cop out on an agreement the two sides had struck.

What is going on in Vienna today is a war over wording and texts. The US president should not display any more weakness. He should make a decision.

The Iranian nuclear negotiating team led by Foreign Minister Zarif is diplomatically skilled and has been able to stand up for our stance and national interests. The diplomats who preceded Mr. Zarif had a difficult task on their hands too.

Members of the team know that they have to fight to have the red lines set by the Supreme Leader respected. They should ramp up their endeavors, because they have the backing of an entire nation.

Any deal with P5+1 comes in two stages. One is agreed to at the venue of the talks and the other is what is approved of in Tehran and Washington. Once what is written at the talks secures the final go-ahead in Tehran and Washington and Iran and P5+1 simultaneously implement its provisions and sanctions are lifted in a reasonable period of time, can one say that a final deal has been clinched.

Americans should embrace the smile Messrs. Rouhani and Zarif are wearing today. These same individuals smiled 13 years ago, but the US failed to seize the opportunity. As a result, Iran assembled 20,000 centrifuges and enriched uranium to 20 percent levels.

Monetary and financial sanctions should be lifted as soon as possible. Iran is quite serious in supervising the implementation of a possible deal.

As for the so-called possible military dimensions, many outstanding issues have been resolved. On the diplomatic front, things are nearing completion. China, Russia and Germany are praising Iran’s cooperation and doubting the stance of the Americans who have pushed themselves into a corner in the talks.

Iran will not allow access by inspectors to its military sites; that is what every country does; Iran too will play by the book.

Everyone should support the negotiating team; actually that is what is happening. The Supreme Leader helped rally the nation behind the negotiators.

The Iranian negotiators should keep insisting on our national interests, and the Americans should know that they cannot take any military action against Iran and imposition of more sanctions won’t work.

By raising the question of missiles in the talks, the Americans committed a strategic blunder. Instead of winning over the Iranian people, they revived 70-year-old memories the Iranians have in mind of the US.