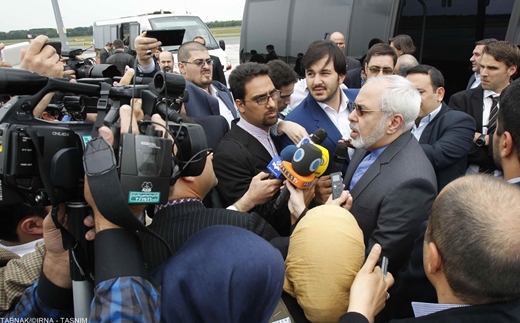 The only agreement the Iranian nation accepts is one which is fair and balanced, Zarif said upon arrival in Vienna.

The only agreement the Iranian nation accepts is one which is fair and balanced, Zarif said upon arrival in Vienna.

The agreement should preserve the nation’s rights and be based on national dignity, said he.

He added he feels there is possibility of progress with the help of political determination and hard work.

What we need today is the other side’s political determination that can smooth the path to an acceptable and sustainable conclusion, he added.

Zarif said he thinks the other side understands that a good long-lasting agreement would be out-of-reach unless the rights of the Iranian nation are recognized.

Asked about hope for a comprehensive agreement, he replied that the talks should be balanced and reasonable.

All Iranian officials have announced that they are ready for exchange of reasonable and logical talks, he said.

If the two sides reach any agreement, it should be based on what both Iran and the Western states accept, Zarif said.

If the two hold talks based on Lausanne statement, there would be a possibility for finding proper solutions, noted the Iranian foreign minister.

Asked about the existing disagreements, Zarif said the text of agreement would not be concluded unless all of its aspects are reviewed, adding we should pass this phase.