Taliban have no place in Iran security strategy: Envoy 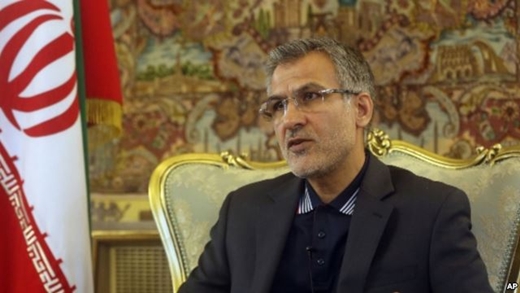 Iran does not accept comments that “Enemy of your enemy is your friend”, and has many times said that it is not going to support extremism under any condition, said Bahrami.

Iran’s Ambassador to Kabul has firmly denied claims that Tehran is cooperating with the Taliban to connect them with Russian officials in a bid to use the militia in the fight against IS terrorist group.

“Taliban have no place in our security strategy,” he told a meeting in Afghanistan Strategic Studies Center in Kabul on Thursday.

Bahrami said Iran does not accept words that “Enemy of your enemy is your friend”, and has many times announced it is not going to support extremism under any condition, because extremism is not controllable.

The dossier of IRNA’s martyred correspondent and eight Iranian diplomats in Mazar-Sharif is not closed yet, the envoy said, so it is evident that we have to maintain intelligence control and supervision on the Taliban.

As for Iran’s concern regarding filling of Salma dam’s reservoir, Bahrami said that all existing issues in bilateral relations between Iran and Afghanistan, including water, could serve as an element of joint cooperation.

He said, “We use this natural phenomenon and other issues as a tool to strengthen ties. We need to cooperate on different issues, among them water, transit, trade, electricity and fossil fuels.”

All these issues, he stressed, should be considered an opportunity; otherwise the game would not end in a win-win result.

When an Afghan reporter asked about Khuff-Herat railway project, Bahrami answered that the budget for the project has been approved and its construction has started, but tracks-laying has yet to be done.

Asked about a scenario in which the Iran nuclear deal is not executed and relations between Iran and the US move toward a conflict, and whether Iran would consider IS a threat and will cooperate with Afghanistan to fight against the group, Bahrami said, “Even if the agreement is not executed, we still consider the terrorist group a threat.”

On Tehran-New Delhi ties, Bahrami said that India will cooperate in developing Chabahar Port and that negotiations on Zahedan-Chabahar railway are underway, adding that the Chabahar project is not in contrast with any country’s interests.