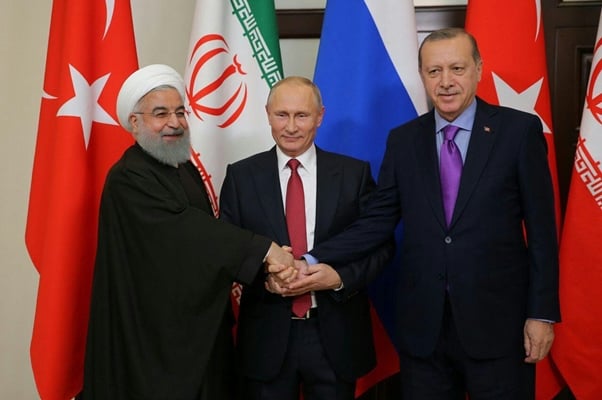 Iran’s Foreign Ministry spokesman says the US was dismayed at not being present in the Astana Talks on Syria, and thus launched the recent strikes to divide Iran, Russia and Turkey, the guarantor states of a ceasefire in the war-torn state.

Speaking at a weekly press conference on Monday, Bahram Qassemi touched upon the US lawmakers’ objection to Washington not attending the negotiations as well as the United States’ possible presence in the upcoming meetings.

“I don’t believe the US will ever end its hostile approach. Given the country’s domestic issues together with certain problems which exist in Arab countries, the US believes its survival is contingent upon warmongering and triggering conflicts.”

Qassemi pointed to the recent airstrikes by the US-led coalition on Syria, and said, “The countries that have caused this tragedy and committed this crime have no right to interfere in the Syria issue without documented evidence and the approval of the representatives of the Organisation for the Prohibition of Chemical Weapons (OPCW).”

“They should try their utmost to make up for this strategic mistake of theirs,” said Qassemi.

The spokesman also touched upon the impact of the US-led Syria attack on regional developments.

“Europe is not necessarily on the same page as France and Britain are, and European countries have different stances. We will continue our negotiations with European countries. There have been, and will be differences of opinion between us and Europe, but one of the reasons behind that move (military action against Syria) was to sow discord among the three countries (Iran, Russia, Turkey) which [seek to] guarantee a ceasefire takes hold in Syria and maybe they (the US, France, Britain) were not pleased with the successful outcome of the Astana talks,” he added.

“This is a pipe dream because these three countries (Iran, Russia, Turkey) will keep working together to establish stability in, and safeguard the territorial integrity of Syria despite their differences of opinion, which have existed since the past,” said the spokesman.

The spokesman also referred to Turkey’s support for the US-led missile attack on Syria.

“From the beginning when we started this trend, we didn’t have a common stance and each one of us had a different position on Syria,” said Qassemi.

“During the successful talks held in Astana, despite the agreements and progress made, we were divided on some issues, and this meeting does not mean the three countries are in full agreement,” the spokesman noted.

“Regrettably, some countries welcomed the [US-led] attack against Syria on Mab’ath Day, and we are not happy with it and we think it was not a nice thing to do,” he noted.

“However, we should pursue the growing trend of Astana talks with full force and without allowing jealous people [to disrupt the process],” he said.

“One of the objectives of the attack was to trigger divisions between the three countries holding talks in Astana, and these three countries should remain vigilant and tread the same path as before to uproot terrorism and prevent the disintegration of Syria,” Qassemi said.

Iranian, Russia and Turkey initiated a series of meetings in Kazakhstan’s capital, Astana, in an effort to pave the way for ending the nearly seven years of war in Syria. This comes as Ankara backs several armed opposition groups operating against Damascus.

Several rounds of Astana negotiations have been held so far. Delegations from the Syrian government and opposition in addition to Iran, Russia, Turkey, and the UN have usually attended the Astana talks, which began in January 2017.

As part of the Astana Process, Russia hosted the Syrian National Dialogue Congress in the resort city of Sochi in January, 2018, with delegates from the Syrian government and opposition in attendance. Around 1,600 delegates representing a wide range of Syrian political factions attended the Sochi talks. The event was boycotted by the High Negotiations Committee, which is based in and guided by Saudi Arabia.

Damascus welcomed the results of the event and said its final statement affirmed that political progress in Syria cannot begin except under the Syrian leadership and without any foreign interference.

The Sochi conference took place just days after the ninth round of UN-led Syria talks failed to achieve tangible results. That round was exceptionally held in the Austrian capital, Vienna, instead of its usual venue of Geneva.