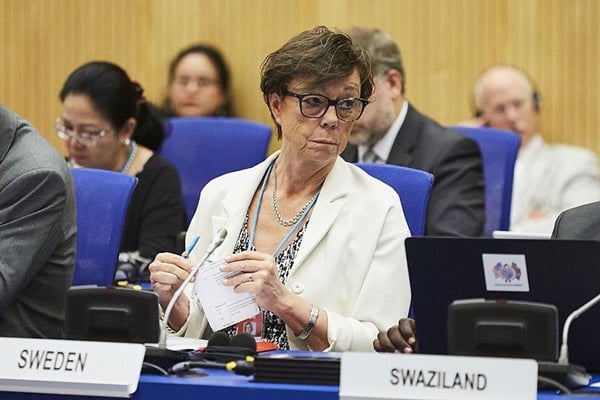 Sweden's State Secretary of Foreign Affairs Annika Söder has referred to the Iran nuclear deal as a message of security and non-proliferation for the world, calling on the US government to live up to its commitments under the accord.

Speaking in the third round of Iran-Sweden political consultations in Tehran on Sunday, Söder touched upon the nuclear deal Iran signed with six world powers back in 2015 known as the Joint Comprehensive Plan of Action (JCPOA).

She said the deal has a message of security and non-proliferation, so Europe unanimously supports its preservation and implementation.

Every effort should be made and all opportunities should be utilized in order to keep the JCPOA alive, she said.

Söder expressed hope the US government will, as a result of the international attempts and moves underway, decide to respect the JCPOA.

She also underlined her country’s determination to continue consultations, cooperation and interaction with Iran in various bilateral, regional and international domains.

For his part, Iran’s Deputy Foreign Minister for Political Affairs Seyyed Abbas Araqchi emphasized the importance of preserving and implementing the JCPOA amid the enhancement of cooperation and exchanges in different arenas.

“The fate of the JCPOA, which is a major diplomatic accomplishment on the international stage, is in jeopardy due to the Trump administration’s bullying behaviour and breaches of commitments,” said the top official.

“Before anything else, the JCPOA is a security pact in the domain of non-proliferation, and any move to counter it would undermine the non-proliferation system and deepen and intensify crises in the region and put us in a dilemma of choosing between security or insecurity,” he said.

“Other parties to the JCPOA, especially the Europeans, are naturally expected to make every effort, both in word and in deed, to help realize the objectives of the agreement, which could lead to the establishment of real peace and stability, especially in the region,” Araqchi said.

He underscored that any attempt to link the JCPOA with other issues and the adoption of the policy of sympathizing with and granting awards to the one that has violated the JCPOA, i.e. the US, emanate from wrong understandings and approaches and will further complicate the situation in the region and in the whole world.

He said the JCPOA is an experience and a major historic choice, and its success is contingent upon concerted efforts and common support that would guarantee the interests of the whole world.

Europe Must Make US Fulfill Its JCPOA Commitments

Earlier in the day, Söder also held talks with Iran’s Foreign Minister Mohammad Javad Zarif. During the talks, the two sides also exchanged views on the Iran nuclear deal, US President Donald Trump’s threats to withdraw from the agreement, developments in Yemen, and the current situation in Syria.

Zarif elaborated on Tehran’s viewpoints about regional and international issues and about Trump’s position on the JCPOA.

“Europe should try more to preserve the JCPOA and make the US fulfill its obligations,” said the top Iranian diplomat.

The Swedish official, in turn, stressed the need to preserve the benefits and achievements of the JCPOA.