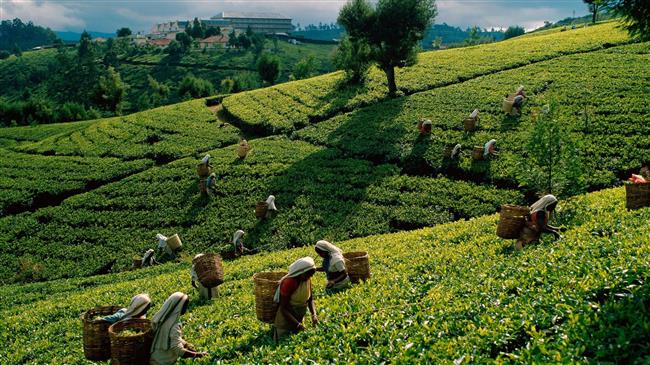 Sri Lanka says it is considering a plan to settle payments to Iran for previous oil purchases by exporting tea to the country at equivalent values.

The announcement was made by the Sri Lanka Tea Board which said a total of $250 million that the country’s Ceylon Petroleum Corporation (CPC) owed Iran could offset payment for a year of tea export to the country.

The Board said the central bank of Sri Lanka was already looking into the technicalities involved.

“If the CPC pays us, we can continue the export of tea to Iran as there is no ban on this commodity. The amount the CPC owes Iran can offset payment for a year of tea export to Iran,” Lucille Wijewardena, the chairman of Sri Lanka Tea Board was quoted as saying by media.

Wijewardena added that a decision over the issue would be adopted within the next week, adding that any move by the central bank would also determine the future course of tear trade with Tehran in light of returning sanctions.

In May, Trump announced that he would pull America out of a 2015 nuclear agreement with Iran and re-impose the sanctions that the deal had envisaged to be lifted.

The sanctions would start with a universal ban on Iran over buying or acquiring US dollars which will come into force in August.  This is expected to close banking channels for trade with Iran. The second phase of sanctions would include restrictions over purchases of crude oil from the country and investing in its oil sector projects which will become effective by the start of November.

Earlier, Sri Lankan officials had emphasized that negotiations had started with international banks to find mechanisms to maintain tea exports to Iran once the sanctions return.

On the same front, Plantation Industries Minister Navin Dissanayake had said that the banks involved were from Europe.

“We are trying to negotiate with the Americans and the Europeans on payment terms. The central bank is already having discussions with the stakeholders,” Dissanayake emphasized. “There are a couple of German banks that were interested in helping us. I am very confident that it can be worked out very soon.”

The official further added that India had already worked out a system for maintaining trade with Iran when the US re-imposes sanctions on Iran, stressing that Sri Lanka could also replicate or follow the same to export tea to Iran.

“Iran is buying a lot of our tea and we have a bilateral agreement with them. Just because the Americans put sanctions on them, it doesn’t mean that they have to impose a sanction on us,” Dissanayake added further in his remarks.

“Right now our tea is going to Iran, but the problem is with the payment terms.”

Official figures show that Sri Lanka exported 27.4 million kilos of Ceylon tea to Iran in 2017. The figure was 19 percent lower than the year before.

Iran is the fourth largest market of Ceylon tea with a 9.5 percent share of total exports.