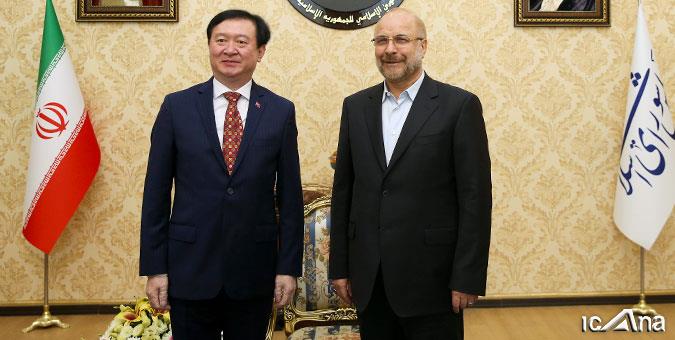 Speaker of the Iranian Parliament Mohammad-Baqer Qalibaf and China’s Ambassador to Tehran Chang Hua have weighed plans for concerted action against the US government’s unilateralism and acts of interference.

In a Wednesday meeting in Tehran, Qalibaf and Chang called for closer interaction between Tehran and Beijing in various fields, as in confrontation with Washington’s unilateral policies.

Decrying the US’ unilateralism in the contemporary world as a serious threat to international peace and security, the Iranian Parliament speaker stressed the need for regional and international cooperation to deal with the White House’s ill-advised measures.

“Today, the world countries, including Tehran and Beijing, are faced with the US’ arrogant nature and unilateralism and their adverse effects on the rights of nations at the national, regional and international levels,” the top Iranian lawmaker said.

“We have repeatedly witnessed the Trump administration’s interference against the sovereignty and independence of countries, including Iran and China, and a series of international issues, such as the environment and destructive weapons,” the Iranian speaker noted.

He finally praised China for its outright opposition to a resolution that the International Atomic Energy Agency Board of Governors has recently adopted on Iran, calling for the expansion of relations between Iran and China in various fields.

In turn, the Chinse ambassador reaffirmed his country’s firm support for Iran’s sovereignty and independence, and expressed opposition to the US’ unilateral sanctions against Tehran.

The Western governments, particularly the US, have been putting pressures on Iran and China for long years on the pretext of human rights issues, but Tehran and Beijing have always stood by each other and have abhorred foreign interference and unilateralism, Chang noted.

The ambassador also expressed China’s unwavering support for the UN Security Council Resolution 2231 and the international agreements, saying China is opposed to the US’ bid for the extension of a UN arms embargo on Iran.

China has already rejected a planned push by the United States to extend a UN arms embargo on Iran and has dismissed Washington’s attempt to again become a participant of the 2015 Iran nuclear deal after its unilateral withdrawal from the agreement.